The Balfour Declaration: The Origins of the Arab-Israeli Conflict (Paperback) 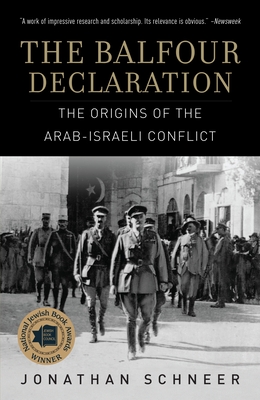 Thoroughly researched, even handed and superbly written, this history explains the origins and importance of the document, signed during the tumult of World War I, that reshaped the Middle East for the next century. An important and fascinating look at the people involved and their politics and warring philosophies. — Louise Jones

Issued in London in 1917, the Balfour Declaration was one of the key documents of the twentieth century. It committed Britain to supporting the establishment in Palestine of “a National Home for the Jewish people,” and its reverberations continue to be felt to this day. Now the entire fascinating story of the document is revealed in this impressive work of modern history.

With new material retrieved from historical archives, Jonathan Schneer recounts in dramatic detail the public and private fight for a small strip of land in the Middle East, a battle that started when the Ottoman Empire took Germany’s side in World War I. The key players in this conflict are rendered in nuanced and detailed relief: Sharif Hussein, the Arab leader who secretly sought British support; Chaim Weizmann, the Zionist folks-mensch who charmed British high society; T. E. Lawrence, the legendary British officer who “set the desert on fire” for the Arabs; and the other generals and prime ministers, soldiers and negotiators, who shed blood and cut deals to grab or give away the precious land.

A book crucial to understanding the Middle East as it is today, The Balfour Declaration is a riveting volume about the ancient faiths and timeless treacheries that continue to drive global events.

Jonathan Schneer, a specialist in modern British history, is a professor at Georgia Tech's School of History, Technology, and Society. He is the author of five additional books, as well as numerous articles and reviews. A fellow of the American Council of Learned Societies in 1985-86, he has also held research fellowships at Oxford and Cambridge Universities in the UK, as well as at the Erich Remarque Center of New York University. He was a founding editor of Radical History Review and is a member of the editorial board of 20th Century British History and the London Journal.

“A work of impressive research and scholarship. Its relevance is obvious.”—Newsweek

“Worthy of a Pulitzer Prize . . . a thoroughly researched, well-balanced study of one of modern history’s most vexing chapters. The Balfour Declaration has all the makings of a classic.”—The Star-Ledger

“Remarkable . . . engagingly written, adding to our knowledge of this frequently told story without ever taking sides . . . This is the most original exposition of the Balfour Declaration to date.”—The Washington Post