Tipperary: A Novel of Ireland (Paperback) 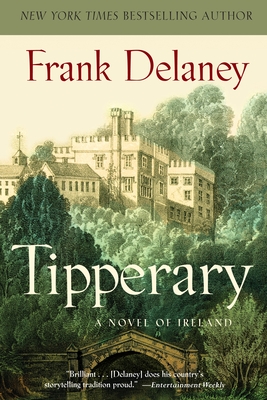 By Frank Delaney
$17.00
Click Title for IN STOCK Location

This is book number 4 in the A Novel of Ireland series.

Out of the complex and rich tapestry of 19th century Irish history, author Frank Delaney carves a lovely old-fashioned novel with a fascinating cast of characters. The protagonist is a "good man" who spends his life in the attempt to secure the woman he loves and an ancient house. In spite of what seems to be overwhelming odds, he perseveres and reveals the strength and nobility of his personality. There are wonderful cameo appearances by Oscar Wilde and W.B. Yeats and exploration into various nooks and crannies of history unique to County Tipperary. Anyone who enjoyed the author's previous magical novel Ireland will be entranced by this quite different and intricate tale. — Northshire Staff

“My wooing began in passion, was defined by violence and circumscribed by land; all these elements molded my soul.” So writes Charles O’Brien, the unforgettable hero of bestselling author Frank Delaney’s extraordinary novel—a sweeping epic of obsession, profound devotion, and compelling history involving a turbulent era that would shape modern Ireland.

Born into a respected Irish-Anglo family in 1860, Charles loves his native land and its long-suffering but irrepressible people. As a healer, he travels the countryside dispensing traditional cures while soaking up stories and legends of bygone times–and witnessing the painful, often violent birth of land-reform measures destined to lead to Irish independence.

At the age of forty, summoned to Paris to treat his dying countryman–the infamous Oscar Wilde–Charles experiences the fateful moment of his life. In a chance encounter with a beautiful and determined young Englishwoman, eighteen-year-old April Burke, he is instantly and passionately smitten–but callously rejected. Vowing to improve himself, Charles returns to Ireland, where he undertakes the preservation of the great and abandoned estate of Tipperary, in whose shadow he has lived his whole life–and which, he discovers, may belong to April and her father.

As Charles pursues his obsession, he writes the “History” of his own life and country. While doing so, he meets the great figures of the day, including Charles Parnell, William Butler Yeats, and George Bernard Shaw. And he also falls victim to less well-known characters–who prove far more dangerous. Tipperary also features a second “historian:” a present-day commentator, a retired and obscure history teacher who suddenly discovers that he has much at stake in the telling of Charles’s story.

In this gloriously absorbing and utterly satisfying novel, a man’ s passion for the woman he loves is twinned with his country’s emergence as a nation. With storytelling as sweeping and dramatic as the land itself, myth, fact, and fiction are all woven together with the power of the great nineteenth-century novelists. Tipperary once again proves Frank Delaney’s unrivaled mastery at bringing Irish history to life.

“The narrative moves swiftly and surely. . . . A sort of Irish Gone With the Wind, marked by sly humor, historical awareness and plenty of staying power.”—Kirkus Reviews

Frank Delaney is the author of the New York Times bestselling novel Ireland, as well as The Last Storyteller, The Matchmaker of Kenmare, Venetia Kelly’s Traveling Show, Tipperary, Shannon, and Simple Courage: A True Story of Peril on the Sea. A former judge for the Man Booker Prize, Delaney enjoyed a prominent career in BBC broadcasting before becoming a full-time writer. Delaney died in 2017.