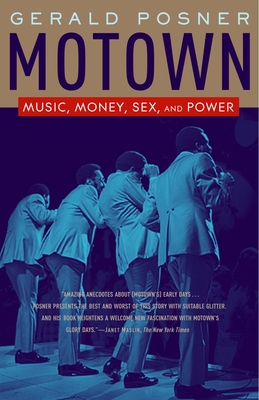 In 1959, twenty-nine-year-old Berry Gordy, who had already given up on his dream to be a champion boxer, borrowed eight hundred dollars from his family and started a record company. A run-down bungalow sandwiched between a funeral home and a beauty shop in a poor Detroit neighborhood served as his headquarters. The building’s entrance was adorned with a large sign that improbably boasted “Hitsville U.S.A.” The kitchen served as the control room, the garage became the two-track studio, the living room was reserved for bookkeeping, and sales were handled in the dining room. Soon word spread that any youngster with a streak of talent should visit the only record label that Detroit had seen in years. The company’s name was Motown.
Motown cuts through decades of unsubstantiated rumors and speculation to tell the true behind-the-scenes narrative of America’s most exciting musical dynasty. It follows the company and its amazing roster of stars from the tumultuous growth years in Detroit, to the drama and intrigue of Hollywood in the 1970s, to resurgence in 2002.
Set against the civil rights movement, the decay of America’s northern industrial cities, and the social upheaval of the 1960s, Motown is a tale of the incredible entrepreneurship of Berry Gordy. But it also features the moving stories of kids from Detroit’s inner-city projects who achieved remarkable success and then, in many cases, found themselves fighting the demons that so often come with stardom—drugs, jealousy, sexual indulgence, greed, and uncontrollable ambition.
Motown features an extraordinary cast of characters, including Diana Ross, Michael Jackson, Marvin Gaye, Smokey Robinson, and Stevie Wonder. They are presented as they lived and worked: a clan of friends, lovers, competitors, and sometimes vicious foes. Motown reveals how the hopes and dreams of each affected the lives of the others and illustrates why this singular story is a made-in-America Greek tragedy, the rise and fall of a supremely talented yet completely dysfunctional extended family.
Based on numerous original interviews and extensive documentation, Motown benefits particularly from the thousands of pages of files crammed into the basement of downtown Detroit’s Wayne County Courthouse. Those court records provide the unofficial—and hitherto largely untold—history of Motown and its stars, since almost every relationship between departing singers, songwriters, producers, and the label ended up in litigation.
From its peaks in the late 1960s and early 1970s, when Motown controlled the pop charts and its stars were sought after even by the Beatles, through the inexorable slide caused by their failure to handle their stardom, Motown is a riveting and troubling look inside a music label that provided the unofficial soundtrack to an entire generation.

Gerald Posner, a former Wall Street lawyer, is an award-winning author of seven books on subjects ranging from Nazi war criminals, to assassinations, to the lives and careers of politicians. A regular investigative contributor to NBC’s Today show and panelist on the History Channel’s HistoryCENTER, he lives in Manhattan and Miami with his wife, author Trisha Posner. More information is available at www.posner.com.

The book that answers the questions about the Motown nobody knows . . .

• Is there any truth to the rumor that the Mafia grabbed control of Motown after Berry Gordy ran afoul of violent loan sharks?
• Which Motown diva was almost run down by a station wagon after a blowout with a rival?
• How did Hollywood and the film industry sink Motown’s film business after the tremendous promise of Lady Sings the Blues?
• What famous star hid from Gordy that he was the father of her first child?
• What was the secret scheme one former executive says the company developed to steal millions of dollars in “suitcases of cash” from artists and songwriters?
• Which Motown star had a violent fight with Gordy on the day JFK was assassinated?
• Was the death of the Temptations’ Paul Williams by a single gunshot a suicide, as ruled by coroners, or a murder to silence him, as suspected by some colleagues?