What Trout Want: The Educated Trout and Other Myths (Hardcover) 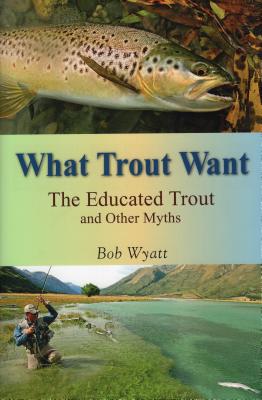 Wyatt doesn't tiptoe around his complaint with fly fishing theory: the idea of trout selectivity is wrong. He challenges at least a century's worth of fishing convention by laying out clear evidence that trout are not intelligent creatures highly suspicious of our artificial flies. Trout simply don't have the ability to learn to any appreciable extent and are governed instead by instinct. Using this as a foundation he builds on the need for different fly design and better presentation as the cornerstones of successful fly fishing. An excellent book for those looking to expand their angling horizons. — Nate George

Bob Wyatt writes, paints, and fishes from his base in Middlemarch, a semi-ghost town on the Taieri River in New Zealand's South Island. Born in Canada, Bob Wyatt has been a fly fisherman since the late fifties, having cut his angling teeth on the classic freestone rivers of Alberta and British Columbia. His writing on fly fishing and related topics has appeared in Gray's Sporting Journal, Fly Rod & Reel, the UK's Fly Fishing & Fly Tying, and Australia's FlyLife magazine.