Letter to the Americans (Paperback) 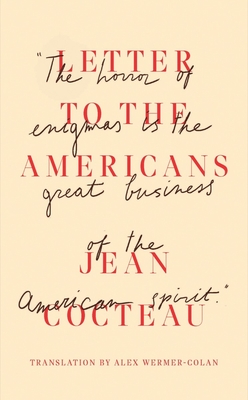 Like Alexis de Tocqueville a century earlier, Jean Cocteau offers a powerful reminder to Americans of their own potential—and issues

In 1949, Jean Cocteau spent twenty days in New York, and began composing on the plane ride home this essay filled with the vivid impressions of his trip. With his unmistakable prose and graceful wit, he compares and contrasts French and American culture: the different values they place on art, literature, liberty, psychology, and dreams. Cocteau sees the incredibly buoyant hopes in America’s promise, while at the same time warning of the many ills that the nation will have to confront—its hypocrisy, sexism, racism, and hegemonic aspirations—in order to realize this potential. Never before translated into English, Letter to the Americans remains as timely and urgent as when it was first published in France over seventy years ago.

Jean Cocteau (1889–1963) was a French writer, poet, designer, draftsman, sculptor, filmmaker, and boxing manager. His list of friends—including New Directions’ founder James Laughlin—would read like a catalog of the stars of the twentieth-century avant-garde. He died of a heart attack after being informed of the death of his friend, the singer Edith Piaf.

The lasting feeling that his work leaves is one of happiness; not of course in the sense that it excludes suffering, but because, in it, nothing is rejected, resented, or regretted.
— W.H. Auden

One of the master craftsmen.
— Tennessee Williams

A man to whom every great line of poetry was a sunrise, every sunset the foundation of the Heavenly City.
— Edith Wharton

That is how Jean Cocteau’s work seems to us, like a light, aerial, stormy civilization hanging from the heavy heart of our own. The very person of the poet adds to it, thin, knotted, silvery as olive trees
— Jean Genet

In our current moment of distrust and anger and suspicion, Cocteau’s reminder is a welcome tonic.
— New York Journal of Books