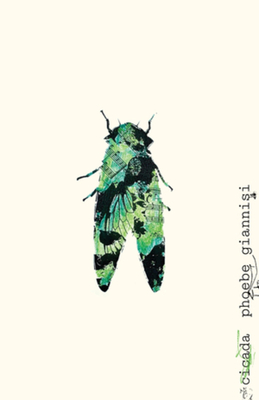 By one of Greece’s foremost contemporary poets, Cicada is Phoebe Giannisi’s second collection in English. The cicada signifies metamorphosis in this breathtaking, lyrical book, which evokes the spirits of Archilochus, Plato, Empedocles, and Heraclitus. As the translator Brian Sneeden remarks: “The ‘I’ in Giannisi’s poetry is never static, never a fixed point, but part of a process of rebodying the ambient.” Yet, despite the fluid, mythic nature of Giannisi’s poems, they are also exquisitely rooted in the everyday: the sea heard through a window, the murmur of a distant mechanical crane, a damp wind, a photo of John and Yoko. Giannisi is a poet internationally known for her idiosyncratic eco-poetics, as well as her poetic multimedia works and performances, and most of all for her brilliant vision glowing at the borders of language, voice, place, and memory.

Phoebe Giannisi was born in Athens in 1964 and is the author of seven books of poetry, including Homerica (chosen by Anne Carson as a favorite book of 2017 in the Paris Review). She is professor of architecture and cultural studies at the University of Thessaly.

Brian Sneeden is author of the poetry collection Last City. He is program coordinator of translation studies at the University of Connecticut and is managing and senior editor of World Poetry Books.

These poems are dynamic in their visual and linguistic movement, “the agitation the ecstasy in life the ego that ricochets within the body the body within the world naked filled with emotions.” Giannisi turns the quotidian into the magical in poems that push against the shifting present moment.
— Publishers Weekly (starred review)

Cicada, Phoebe Giannisi’s second collection to appear in English translation, offers a vibrant lyric consideration of metamorphosis, mortality, and poetry as song, all centered around the figure of the shapeshifting insect…A heightened sense of wonder, borne from a recognition of the transitory nature of life itself, pervades this collection.

Giannisi is unquestionably herself within a vanguard of Greek poets for whom self-awareness and honesty have become second nature.
— Shon Arieh-Lerer - World Literature Today

Sneeden is a meticulous translator and a poet in his own right. He brings Phoebe Giannisi’s work to life with immediacy and conviction.
— Edmund Keeley

Beautifully translated...The book resounds with an "alien voice from the fence of the teeth." Alien, not only because it is the song of the cicadas that is constantly evoked and lurks from underneath the pages..., but even more so because the voice here belongs to all sorts of beings, especially the non-human ones."
— Cristina Pérez Díaz - Asymptote