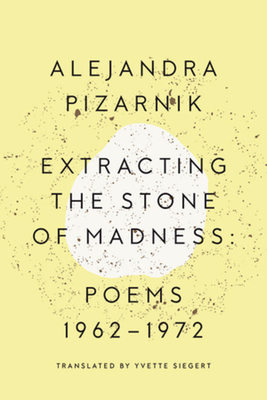 Pure emotion. Her poetry reads like an eerie stroll through fog laden marshlands where the mind naturally catches itself among a feast of morbid musings most of us tend to veer away from. Between quick verses and longer prose poems Pizarnik presents herself to us as a reflective investigator more sensitive to what is not being said in a poem than what we expect to be. Knowing now about her pains and struggles leading to her suicide one can see the inner turmoil in some of these lines, her focus on loneliness, wandering, and even obsessively contemplating her own death. And you can feel that ache from the skin down to the bone. Superb. — Alex Bell

The first full-length collection in English by one of Latin America’s most significant twentieth-century poets.

Revered by the likes of Octavio Paz and Roberto Bolano, Alejandra Pizarnik is still a hidden treasure in the U.S. Extracting the Stone of Madness: Poems 1962–1972 comprises all of her middle to late work, as well as a selection of posthumously published verse. Obsessed with themes of solitude, childhood, madness and death, Pizarnik explored the shifting valences of the self and the border between speech and silence. In her own words, she was drawn to "the suffering of Baudelaire, the suicide of Nerval, the premature silence of Rimbaud, the mysterious and fleeting presence of Lautréamont,” as well as to the “unparalleled intensity” of Artaud’s “physical and moral suffering.”

Alejandra Pizarnik (1936–1972) was born in Argentina and educated in Spanish and Yiddish. In addition to poetry, Pizarnik also wrote experimental works of theater and prose. She died of a deliberate drug overdose at the age of thirty-six.

The poet Yvette Siegert has also translated The Reef by Juan Villoro and Alejandra Pizarnik’s poetry collections A Musical Hell, Diana’s Tree, and Extracting the Stone of Madness, for which she won the 2017 Best Translated Book Award.

Pizarnik reveals an ecstasy in the instability of language and draws from it a mercurial, pathetic truth.
— Los Angeles Review of Books

I...was blown away by the thoughtful interiority—by turns delicate and brutal—of this Argentine poet, who died of an intentional drug overdose at the age of 36. The poems in this new collection, translated by Yvette Siegert and published earlier this year, show a preoccupation with the space—not so large, but also interminably vast—between the workings of the mind and those of the natural world.
— Jane Yong Kim - The Atlantic

The darkly beautiful poems of the great Argentinian writer Alejandra Pizarnik generate an immersive, Gothic atmosphere in which art is both violence and respite, contamination and antidote, hell and paradise.
— The Boston Review

"On the page she carves out spaces of solitude and silence in which language is reduced to its very essence..."
— Matthew Phipps - The Millions

To the allure Pizarnik has, as a figure wrapped in mystery and an inexplicable personality, must be added the fact that, word by word, she “wrote the night,” and the reader who takes an interest in her will discover that this nocturnal writing, which had a great sense of risk, was born of the purest necessity, something seen in very few 20th-century writers: an extreme lyric and a tragedy.
— Enrique Vila-Matas

Each of Pizarnik's poems is the cube of an enormous wheel.
— Julio Cortázar

Pizarnik made a huge impact on Spanish-language poetry, taking it down to its darkest depths and abandoning it there, leaving one of the most fascinating legacies in Argentine literature.
— The Argentina Independent

This overdue bilingual edition showcases the exquisite range of her short career…Pizarnik's brilliant, otherworldy voice will resonate for generations.
— Booklist

To bear down on Pizarnik’s scant lines is to find their essential rigor: nothing is brittle, nothing breaks.
— Joshua Cohen - Harper's