A Season in Hell & The Drunken Boat (Paperback) 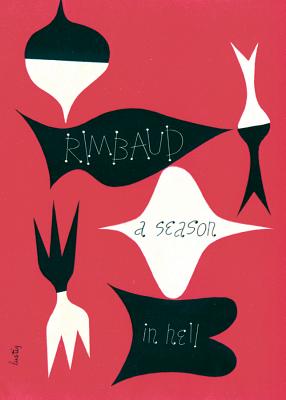 The world's first young "punk" poet who influenced the likes of Jim Morrison, Jack Kerouac and Bob Dylan. Originally published in 1873, these poems illustrate the raw power of emotion from one lost soul embedded in a heap of turmoil. — Alex Bell

A reissue of Rimbaud’s highly influential work, with a new preface by Patti Smith and the original 1945 New Directions cover design by Alvin lustig.

New Directions is pleased to announce the relaunch of the long-celebrated bilingual edition of Rimbaud’s A Season In Hell & The Drunken Boat — a personal poem of damnation as well as a plea to be released from “the examination of his own depths.”

Rimbaud originally distributed A Season In Hell to friends as a self-published booklet, and soon afterward, at the age of nineteen, quit poetry altogether. New Directions’s edition was among the first to be published in the U.S., and it quickly became a classic. Rimbaud’s famous poem “The Drunken Boat” was subsequently added to the first paperbook printing. Allen Ginsberg proclaimed Arthur Rimbaud as “the first punk” — a visionary mentor to the Beats for both his recklessness and his fiery poetry.

Unknown beyond the avant-garde at the time of his death in 1891, Arthur Rimbaud has become one of the most liberating influences on twentieth-century culture. Born Jean Nicolas Arthur Rimbaud in Charleville, France, in 1854, Rimbaud’s family moved to Cours d’Orléans, when he was eight, where he began studying both Latin and Greek at the Pension Rossat. While he disliked school, Rimbaud excelled in his studies and, encouraged by a private tutor, tried his hand at poetry. Shortly thereafter, Rimbaud sent his work to the renowned symbolist poet Paul Verlaine and received in response a one-way ticket to Paris. By late September 1871, at the age of sixteen, Rimbaud had ignited with Verlaine one of the most notoriously turbulent affairs in the history of literature. Their relationship reached a boiling point in the summer of 1873, when Verlaine, frustrated by an increasingly distant Rimbaud, attacked his lover with a revolver in a drunken rage. The act sent Verlaine to prison and Rimbaud back to Charleville to finish his work on A Season in Hell. The following year, Rimbaud traveled to London with the poet Germain Nouveau, to compile and publish his transcendent Illuminations. It was to be Rimbaud’s final publication. By 1880, he would give up writing altogether for a more stable life as merchant in Yemen, where he stayed until a painful condition in his knee forced him back to France for treatment. In 1891, Rimbaud was misdiagnosed with a case of tuberculosis synovitis and advised to have his leg removed. Only after the amputation did doctors determine Rimbaud was, in fact, suffering from cancer. Rimbaud died in Marseille in November of 1891, at the age of 37. He is now considered a saint to symbolists and surrealists, and his body of works, which include Le bateau ivre (1871), Une Saison en Enfer (1873), and Les Illuminations (1873), have been widely recognized as a major influence on artists stretching from Pablo Picasso to Bob Dylan.

Patti Smith is a poet, performer, visual artist, and author of M Train and the National Book Award-winning memoir Just Kids. She has twelve albums, has had numerous gallery shows, and continues to give concerts of her music and poetry. Her books include Early Work, The Coral Sea, Witt, Babel, Auguries of Innocence, Woolgathering, Land 250, Trois, and many others. In 2022, Smith was awarded the Ruth Lilly Poetry Prize by the Poetry Foundation in recognition of her outstanding lifetime achievement. She lives in New York.

Louise Varese was an American biographer and translator of French. She is known for her translations of Stendhal, Proust, Georges Simenon, Julien Gracq, St.-John Perse and Arthur Rimbaud.

Every writer produces some haunting passages, some memorable phrases, but with Rimbaud they are strewn all over the pages like gems tumbled from a rifled chest.
— Henry Miller