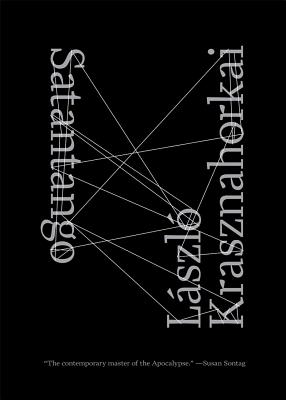 By László Krasznahorkai, George Szirtes (Translated by)
Call or email to see if a used copy is available.
Out of Print

Everyone in a godforsaken, rain-soaked Hungarian village is looking for a way out, but escape may only be possible through the devil himself. A mischievous fable in the tradition of Kafka and Gogol. — Charles Bottomley

From the winner of the 2015 Man Booker International Prize

At long last, twenty-five years after the Hungarian genius László Krasznahorkai burst onto the scene with his first novel, Satantango dances into English in a beautiful translation by George Szirtes.

Already famous as the inspiration for the filmmaker Béla Tarr’s six-hour masterpiece, Satantango is proof, as the spellbinding, bleak, and hauntingly beautiful book has it, that “the devil has all the good times.”

The story of Satantango, spread over a couple of days of endless rain, focuses on the dozen remaining inhabitants of an unnamed isolated hamlet: failures stuck in the middle of nowhere. Schemes, crimes, infidelities, hopes of escape, and above all trust and its constant betrayal are Krasznahorkai’s meat. “At the center of Satantango,” George Szirtes has said, “is the eponymous drunken dance, referred to here sometimes as a tango and sometimes as a csardas. It takes place at the local inn where everyone is drunk. . . . Their world is rough and ready, lost somewhere between the comic and tragic, in one small insignificant corner of the cosmos. Theirs is the dance of death.”

“You know,” Mrs. Schmidt, a pivotal character, tipsily confides, “dance is my one weakness.”

The winner of the 2019 National Book Award for Translated Literature and the 2015 Man Booker International Prize for lifetime achievement, László Krasznahorkai was born in Gyula, Hungary.

George Szirtes (b. 1948) is an award-winning poet and translator who settled in England after his family fled the Hungarian Uprising of 1956.

Krasznahorkai has studied humanity, our weakness and folly. In his wry, engaging disenchantment lingers hope in the lucid pursuit of salvation. “Something is going to happen today,” remarks one of the characters in Satantango, and to read Krasznahorkai is to experience that frisson of anticipation and excitement, knowing that an intoxicating adventure really does await us.

Like something far down the periodic table of elements, Krasznahorkai’s sentences are strange, elusive, frighteningly radioactive. They seek to replicate the entropic whirl of consciousness itself and, in the case of Eszter, to stop its “onward rush” entirely.
— Jacob Silverman

The excitement of Krasznahorkai’s writing is that he has come up with his own original forms — and one of the most haunting is his first, Satantango. There’s nothing else like it in contemporary literature.

What prevents Satantango from devolving into a mere exercise in clever derivation, however, is Krasznahorkai’s fervent mission to thoroughly mine the mysteriousness, and potential miraculousness, of a seemingly corrupt physical reality. His wry, snake-like sentences produce—or unspool—layer upon layer of psychological insight, metaphysical revelation, and macroscopic historical perspective.


On occasion, Krasznahorkai's sentences seem to swell and deflate; each clause seems to twist in its own direction. His sentences are, by turns, lovely, brutal, bombastic, ironic, and precise.

Krasznahorkai produces novels that are riveting in their sinewy momentum and deeply engaging in the utter humanity of their vision.

His prose is formed like a fractal: self-similar patterns where every sentence exceeds its topological dimensions to become a microcosm of the entire work. We definitely hear Beckett in him.

Think of Satantango, then, as an Eastern European blues album that looks to affirm the coarse texture of life rather than auto-tune it into something smoother or more amendable to wish fulfillment.


Krasznahorkai's sentences are snaky, circuitous things, near-endless strings of clauses and commas that through reversals, hesitations, hard turns and meandering asides come to embody time itself, to stretch it and condense it, to reveal its cruel materiality, the way it at once traps us and offers, always deceptively, to release us from its grasp, somewhere out there after the last comma and the final period: after syntax, after words.

Linguistically [Satantango] is a stunning novel, but it's tough going, an hours-long slog through mud and meaninglessness and superstition that will leave an indelible mark on anyone who gets through it.


A writer without comparison, László Krasznahorkai plunges into the subconscious where this moral battle takes place, and projects it into a mythical, mysterious, and irresistible work of post-modern fiction, a novel certain to hold a high rank in the canon of Eastern European literature.

László Krasznahorkai’s novel Satantango is an argument for the vitality of translation. It is bold, dense, difficult, and utterly unforgettable.


Krasznahorkai is a poet of dilapidation, of everything that exists on the point of not-existence.

Whether he's inside the minds and machinations of his characters' scheming heads, tramping through the muddy streets from one ruined destination to another, or speculating on the value of existence under such Godless conditions, Krasznahorkai proves himself to be capable of bringing anything to life, Satantango's pages are teeming with it.


His textual ambiguities make any concrete reading of Satantango nearly impossible, and we are put in the same befuddled, liminal state of mind as the fictional residents themselves: missing the thing by waiting for it.


Utterly absorbing–it dramatises with great invention the parching of the human imagination and wrings an almost holy grandeur from a tale of provincial petulance.

The serpentine motion that is neither progress nor repetition, the forward and backward steps of the 'tango' explicitly structure Satantango.


I love Krasznahorkai’s books. His long, meandering sentences enchant me, and even if his universe appears gloomy, we always experience that transcendence which to Nietzsche represented metaphysical consolation.
— Imre Kertesz

Krasznahorkai is the contemporary Hungarian master of the apocalypse who inspires comparisons with Gogol and Melville.
— Susan Sontag

The universality of his vision rivals that of Dead Souls and far surpasses all the lesser concerns of contemporary writing.