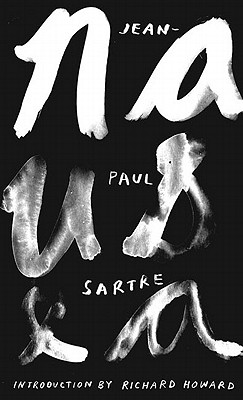 By Jean-Paul Sartre, Richard Howard (Introduction by), Lloyd Alexander (Translated by)
Call or email to see if a used copy is available.
Out of Print

The classic Existentialist novel, with a new introduction by renowned poet, translator, and critic Richard Howard.

Winner of the 1964 Nobel Prize for Literature, Jean-Paul Sartre, French philosopher, critic, novelist, and dramatist, holds a position of singular eminence in the world of letters. Among readers and critics familiar with the whole of Sartre's work, it is generally recognized that his earliest novel, La Nausée (first published in 1938), is his finest and most significant. It is unquestionably a key novel of the twentieth century and a landmark in Existentialist fiction.

Nausea is the story of Antoine Roquentin, a French writer who is horrified at his own existence. In impressionistic, diary form he ruthlessly catalogues his every feeling and sensation. His thoughts culminate in a pervasive, overpowering feeling of nausea which "spreads at the bottom of the viscous puddle, at the bottom of our time—the time of purple suspenders and broken chair seats; it is made of wide, soft instants, spreading at the edge, like an oil stain." Roquentin's efforts to come to terms with life, his philosophical and psychological struggles, give Sartre the opportunity to dramatize the tenets of his Existentialist creed.

Jean-Paul Sartre was a prolific philosopher, novelist, public intellectual, biographer, playwright and founder of the journal Les Temps Modernes. Born in Paris in 1905 and died in 1980, Sartre was awarded the Nobel Prize for Literature in 1964—and turned it down. His books include Nausea, Intimacy, The Flies, No Exit, Sartre’s War Diaries, Critique of Dialectical Reason, and the monumental treatise Being and Nothingness.

Richard Howard is the author of eleven books of poetry, including Untitled Subjects, which won the Pulitzer Prize in 1970. He is the translator for more than 150 works from the French language. He received the American Book Award for his translation of Charles Baudelaire’s Les Fleurs du Mal.

It is the most enjoyable book Sartre has ever written.
— The New Yorker

The best-written and most interesting of Sartre's novels.
— Atlantic Monthly

With Nausea Sartre has succeeded magnificently—and horribly—in extending the realm of the novel to the outermost reaches of naked self-examination.