Journey to the End of the Night (Paperback) 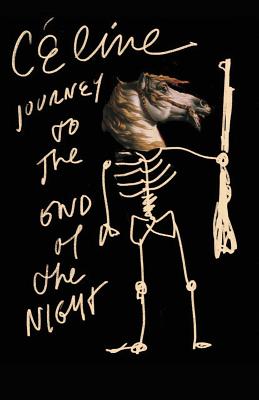 For my money, one of the greatest novels of the 20th century. And oh is it dark—where black humor comes from. The protagonist sees horror after horror from the trenches of World War I to colonial exploitation in the rubber trade. In America, he becomes a flea-counter on immigrants, and eventually returns to Paris to become a doctor to the most miserably disenfranchised. Funny and unspeakably bleak. — Dafydd Wood

Céline’s masterpiece—colloquial, polemic, hyper realistic—boils over with bitter humor and revulsion at society’s idiocy and hypocrisy: Journey to the End of the Night is a literary symphony of cruelty and violence that hurtles through the improbable travels of the petit bourgeois (and largely autobiographical) antihero, Bardamu: from the trenches of WWI, to the African jungle, to New York, to the Ford Factory in Detroit, and finally to life in Paris as a failed doctor. Ralph Manheim’s pitch-perfect translation captures Céline’s savage energy, and a dynamic afterword by William T. Vollmann presents a fresh, furiously alive take on this astonishing novel.

Louis-Ferdinand Céline (1894-1961) was a French writer and doctor whose novels are antiheroic visions of human suffering. Accused of collaboration with the Nazis, Céline fled France in 1944 first to Germany and then to Denmark. Condemned by default (1950) in France to one year of imprisonment and declared a national disgrace, Céline returned to France after his pardon in 1951, where he continued to write until his death. His classic books include Journey to the End of the Night, Death on the Installment Plan, London Bridge, North, Rigadoon, Conversations with Professor Y, Castle to Castle, and Normance.

Ralph Manheim (1907-1992) was an American translator of German and French literature, as well as occasional works from Dutch, Polish and Hungarian. The PEN/Ralph Manheim Medal for Translation, a major lifetime achievement award in the field of translation, is named in honor of Manheim and his work. He won many awards in his lifetime, including a MacArthur genius grant, a Guggenheim Fellowship ,and a National Book Award.

William T. Vollmann is the author of The Atlas (winner of the 1997 PEN Center West Award), Seven Dreams: A Book of North American Landscapes, and Europe Central. His nonfiction includes Rising Up and Rising Down which was nominated for the National Book Critics Circle Award in 2003, and his novel Europe Central won the National Book Award in 2005.

The most blackly humorous and disenchanted voice in all of French literature.
— John Sturrock - London Review of Books

My favorite French classic has to be Journey to the End of the Night. It's an epic that takes you all around the world, but the center of the world is Paris, or Céline's delirious, slightly hallucinatory, incredibly poetic vision of it.

This is the novel, perhaps more than any other, that inspired me to write fiction. Céline showed me that
it was possible to convey things that had heretofore seemed inaccessible.
— Will Self - The New York Times Book Review

Teeming with disease, misanthropy, and dark comedy.
— The New Yorker

An extraordinarily gifted writer, he writes like a lunging live wire, crackling and wayward, full of hidden danger.
— Alfred Kazin

One of the greatest novels of the twentieth century. It could be said that without Céline there would have been no Henry Miller, no Jack Kerouac, no Charles Bukowski.
— John Banville

Céline is my Proust!
— Philip Roth