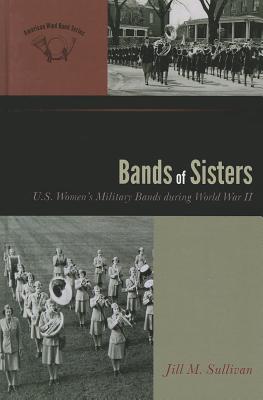 On Saturday, November 14, 1944, radio listeners heard an enthusiastic broadcast announcer describe something they had never heard before: Women singing the "Marines' Hymn" instead of the traditional all-male United States Marine Band. The singers were actually members of its sister organization, The Marine Corps Women's Reserve Band of Camp Lejeune, North Carolina. Today, few remember these all-female military bands because only a small number of their performances were broadcast or pressed to vinyl. But, as Jill Sullivan argues in Bands of Sisters: U.S. Women's Military Bands during World War II, these gaps in the historical record can hardly be treated as the measure of their success. The novelty of these bands--initially employed by the U.S. military to support bond drives--drew enough spectators for the bands to be placed on tour, raising money for the war and boosting morale. The women, once discharged at the war's end, refused to fade into post-war domesticity. Instead, the strong bond fostered by youthful enthusiasm and the rare opportunity to serve in the military while making professional caliber music would come to last some 60 years. Based on interviews with over 70 surviving band members, Bands of Sisters tells the tale of this remarkable period in the history of American women. Sullivan covers the history of these ensembles, tracing accounts such as the female music teachers who would leave their positions to become professional musicians--no easy matter for female instrumentalists of the pre-war era. Sullivan further traces how some band members would later be among the first post-war music therapists based on their experience working with medical personnel in hospitals to treat injured soldiers. The opportunities presented by military service inevitably promoted new perspectives on what women could accomplish outside of the home, resulting in a lifetime of lasting relationships that would inspire future generations of musicians.