The Stuff of Life: A Graphic Guide to Genetics and DNA (Paperback) 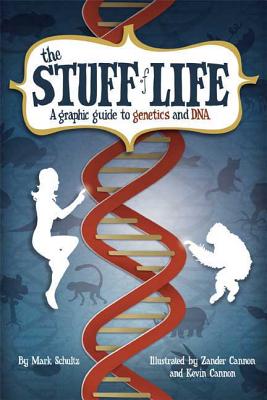 Let's face it: From adenines to zygotes, from cytokinesis to parthenogenesis, even the basics of genetics can sound utterly alien. So who better than an alien to explain it all? Enter Bloort 183, a scientist from an asexual alien race threatened by disease, who's been charged with researching the fundamentals of human DNA and evolution and laying it all out in clear, simple language so that even his slow-to-grasp-the-point leader can get it. In the hands of the award-winning writer Mark Schultz, Bloort's predicament becomes the means of giving even the most science-phobic reader a complete introduction to the history and science of genetics that's as easy to understand as it is entertaining to read.

Mark Schultz has written for DC Comics and Marvel Comics, and his scripts and illustrations—most notably for his tour-de-force series Xenozoic Tales (also known as Cadillacs and Dinosaurs) and Superman—have garnered five Harvey Awards, two Eisners, and an Inkpot.

Illustrator Zander Cannon has worked for clients ranging from the National Oceanic and Atmospheric Administration to DC Comics, collaborating on such titles as The Replacement God and Smax and winning two Eisners for their work on Top 10.

Illustrator Kevin Cannon has worked for clients ranging from the National Oceanic and Atmospheric Administration to DC Comics, collaborating on such titles as The Replacement God and Smax and winning two Eisners for their work on Top 10.

“In the battle against scientific ignorance, graphic novels may be the only thing that can save us . . . What's the solution to America's crisis in science education? More comic books. In December comes The Stuff of Life: A Graphic Guide to Genetics and DNA, a remarkably thorough explanation of the science of genetics, from Mendel to Venter, with a strand of social urgency spliced in.” —Barry Harbaugh, Wired

“With the graphic novel gaining status as a form of serious storytelling, The Stuff of Life makes a case for the graphic-novel textbook . . . The illustrations are simultaneously cute and explanatory, and the text's oversimplifications and techno-utopianism are justified for a cartoon treatment of one of the most complex stories in science.” —Seed, Best Books of 2008

“It takes a rare breed of graphic novelist to bring genetics and DNA out of the laboratory and onto the funny pages, but Mark Schultz was up to the task. Get ready to dive into cloning, stem-cell research, and bacteria therapy with a cast of screwball characters--from eccentric spliced DNA to bumbling bacteria to manic, genetically modified plants (‘I feel tingly all over!'). You'll be so charmed that you won't even notice you've absorbed an entire scientific field (screened for accuracy by genetics professors) in 140 pages of wacked-out comics.” —Tobin Hack, Plenty

“The Stuff of Life is a beautifully written and lavishly illustrated example of the power of comics to communicate the wonders of the natural world. Mark Schultz's words combine with Zander Cannon and Kevin Cannon's pictures in a dynamic enzymatic reaction that gives readers a glimpse at how life works. Ambitious, expansive, and completely successful, the story in The Stuff of Life starts on the invisible rungs of DNA and climbs without a misstep across the millennia of organic evolution. With the help of Bloort, an alien exploring the wonders of earthly genetics, we get to see our evolutionary and genetic heritage in a new light. Often funny and always engrossing, The Stuff of Life provides an exciting point of entry for anyone interested in how life on earth shapes and reshapes itself in the face of ever-changing conditions. Learning genetics just got a whole lot more fun.” —Jay Hosler, Associate Professor of Biology at Juniata College and author and illustrator of Clan Apis and The Sandwalk Adventures

“Mark Schultz's brilliant, whacky The Stuff of Life could hardly have arrived at a better time, with advances in genetics transforming the biological sciences--from microbiology to medicine. This is serious fun.” —Jessica Snyder Sachs, author of Good Germs, Bad Germs: Health and Survival in a Bacterial World

“Drawn with panache and great good humor by Zander Cannon and Kevin Cannon, and scripted with exceptional clarity by Schultz, this is pretty much the best educational graphic novel in Hill and Wang's new line of them, good enough for interested nonscientists to keep handy for whenever they need a refresher on its subject. It even has a happy--well, promising--ending.” —Ray Olson, Booklist

“Schultz's wit and the alien-report device make it easier to learn what you didn't understand in high school.” —Michael Gill, Cleveland Free Times