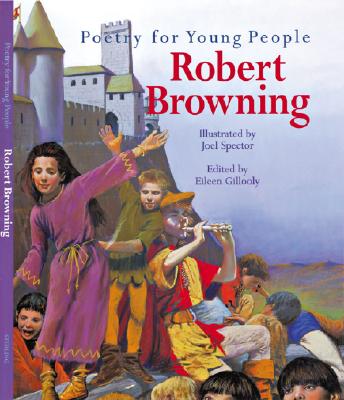 The newest book in the Poetry for Young People series is Robert Browning. "Robert Brownings poetry has mysteries and a beauty of language that youngsters will love exploring." Joel Spectors vivid and engaging illustrations bring Brownings words to life. In this book, each poem has its own brief introduction. The poems that are included were originally written for young people and are bold and dramatic. Several poems have to do with the topic of war, and the wonderful Pied Piper of Hamelin is also included. — Northshire Staff

Robert Browning's poetry has mysteries and a beauty of language that youngsters will love exploring, from the classic and beloved "Pied Piper of Hamelin" to the charming verse play "Pippa Passes." Perfect for parents to read aloud or along with their children, and accompanied by striking artwork, here is a selection of some of Browning's most reader-friendly works. Several paintings compellingly capture "Pied Piper's" drama: the Piper, smiling as he offers his services; the rats fleeing the town in droves; and the entranced children who will soon be lost forever. "Home Thoughts from Abroad" ("Oh, to be in England, Now that April's there...") features illustrations of the countryside in full bloom. There are 25 excerpts in all, fully annotated to enrich young readers' understanding of these poems.
"Dr. Eileen Gillooly"" earned her Ph.D. from Columbia University, where she is Director of the Core Curriculum and teaches nineteenth-century literature and culture. She has also edited another entry in the Poetry for Young People series on Rudyard Kipling. "

"Joel Spector's ""work appears regularly in books, in newspapers such as the New York Times, in magazines such as Business Week, Good Housekeeping, and Newsweek, and throughout Europe and in Japan. He lives in Connecticut."