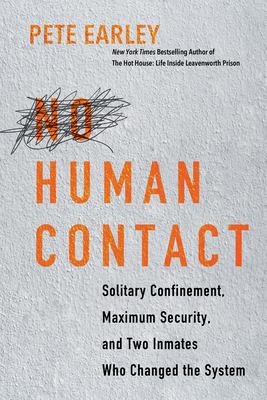 A deeply disturbing and human look at the American prison system’s practice of lifelong solitary confinement, and the  two killers who changed modern day corrections. No Human Contact by the New York Times bestselling author of THE HOT HOUSE, Pulitzer Prize finalist Pete Earley takes readers inside the criminal justice system, examining the brutal lives of those in solitary confinement in an eye opening narrative of reprehensible crime, draconian punishment, and seemingly impossible reform in the harshest depths of the country’s most dangerous prisons.

In 1983, Thomas Silverstein and Clayton Fountain, both serving life sentences at the U.S, Prison in Marion, Illinois, separately murdered two correction officers on the same day. The Bureau of Prisons condemned both men to the severest punishment that could legally be imposed, one created specifically for them. It was unofficially called “no human contact.”

Each initially spent nine months in a mattress-sized cell where the lights burned twenty-four hours a day. They were clothed only in boxer shorts, completely sealed off from the outside world with only their minds to occupy their time. Eventually granted minimal privileges, Fountain turned to religion and endured twenty-one-years before dying alone of natural causes. Silverstein became a skilled artist and lasted thirty-six years, longer than any other American prisoner held in isolation. Amazingly, both men found purpose to their existence while confined in the belly of the beast.

Pete Earley—the only journalist to be granted face-to-face access with Silverstein—examines profound questions at the heart of our justice system. Were Silverstein and Fountain born bad? Or were they twisted by abusive childhoods? Did incarceration offer them a chance of rehabilitation—or force them to commit increasingly heinous crimes? No Human Contact elicits a uniquely deep and uncomfortable understanding of the crimes committed, the use of solitary confinement, and the reality of life, redemption, and death behind prison walls.

Pete Earley is a mental health advocate, journalist, and New York Times bestselling author of fiction and nonfiction books, including The Hot House: Life Inside Leavenworth Prison and the 2007 Pulitzer Prize finalist Crazy: A Father’s Search Through America’s Mental Health Madness. A former Washington Post reporter, Earley has appeared five times before the U.S. Congress to testify about the need for mental health reform, has spoken in 49 states, and addressed legislators in four foreign countries. He serves on the board of the Corporation for Supportive Housing, which finances projects to eliminate homelessness. He writes regularly for USA Today and the Washington Post about mental health issues. Earley lives in Northern Virginia and can be found online at PeteEarley.com.


"Pete Earley is a fair‑minded reporter who apparently decided that his own feelings were irrelevant to the story. There is a purity to this kind of journalism." —The Washington Post


"A former reporter, Mr. Earley writes with authenticity and style — a wonderful blend of fact and fiction in the best tradition of journalists‑turned‑novelists." —Nelson DeMille


“A page‑turner, as compelling and evocative as the finest novel. The best book on prison I’ve ever read.” —Jonathan Kellerman on The Hot House “A superb piece of reporting.” —Tom Clancy on The Hot House  “The book is a large act of courage, its subject an important one, and . . . [Pete] Earley does it justice.” —The Washington Post on The Hot House


“If you’re going to read any book about prison, The Hot House is the one…For anyone who wonders why America imprisons its criminals this book is a must. It is the most realistic, unbuffed account of prison anywhere in print.” —The Kansas City Star on The Hot House


“Earley tells us the story of Leavenworth…he creates an exceptional work of journalism.” —Detroit Free Press on The Hot House


“This is a book that fits the cliché: impossible to put down.” —The Oregonian on The Hot House


“This book is by a reporter, and gives the reader reporting at its very finest…The Hot House is a book that sucks one deep intothe darkness…[It} makes the reader feel in the room where secret things are being said.” —The Los Angeles Times on The Hot House


“To [Earley’s] credit, he does not romanticize the keepers or the criminals. His cool and concise prose style serves him well. . . .This is a gutsy book.” —Chicago Tribune on The Hot House


“A combination of old‑fashioned muckraking and genuine empathy...an important manifesto.” —The Washington Post on Crazy: A Father’s Search Through America’s Mental Health Madness


“Parents of the mentally ill should find solace and food for thought in [this book’s] pages.” —Publishers Weekly on Crazy: A Father’s Search Through America’s Mental Health Madness


“Crazy is a godsend. It will open the minds of many who make choices for the mentally ill. Countless numbers of us owe PeteEarley and his son Mike a great debt.” —Patty Duke on Crazy: A Father’s Search Through America’s Mental Health Madness


“The Washington Post Magazine reporter has constructed a masterful psychological portrait of a man seemingly without a soul. A Family of Spies is a classic of the genre.” —Publishers Weekly on Family of Spies