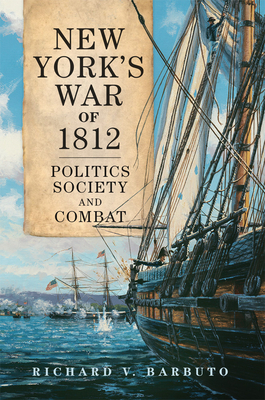 Popular memory of the War of 1812 caroms from the beleaguered Fort McHenry to the burning White House to an embattled New Orleans. But the critical action was elsewhere, as Richard V. Barbuto tells us in this clarifying work that puts the state of New York squarely at the center of America's first foreign war. British demands to move the northern border as far south as the Ohio River put New York on the first line of defense. But it was the leadership of Governor Daniel D. Tompkins that distinguished the state's contribution to the war effort, effectively mobilizing the considerable human and material resources that proved crucial to maintaining the nation's sovereignty. New York's War of 1812 shows how, despite a widespread antiwar movement and fierce partisan politics, Tompkins managed to corral and maintain support--until 1814, when Britain agreed to peace. Retrieving New York's War of 1812 from the fog of military history, Barbuto describes the disproportionate cost paid by the state in loss of life and livelihood. The author draws on in-depth research of the state's legislative, financial, and militia records, as well as on the governor's extensive correspondence, to plot the conduct of the war regionally and chronologically and to tell the stories of numerous raids, skirmishes, and battles that touched civilians in their homes and communities. Whether offering a clearer picture of the performance of the state militia, providing a more accurate account of the conflict's impact on the state's diverse population, or newly detailing New York's decisive contribution, this deeply researched, closely observed work revises our view of the nation's perhaps least understood war.