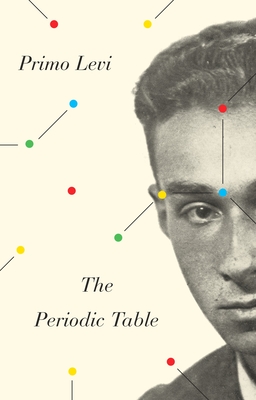 The Periodic Table is largely a memoir of the years before and after Primo Levi’s transportation from his native Italy to Auschwitz as an anti-Facist partisan and a Jew.

It recounts, in clear, precise, unfailingly beautiful prose, the story of the Piedmontese Jewish community from which Levi came, of his years as a student and young chemist at the inception of the Second World War, and of his investigations into the nature of the material world. As such, it provides crucial links and backgrounds, both personal and intellectual, in the tremendous project of remembrance that is Levi’s gift to posterity. But far from being a prologue to his experience of the Holocaust, Levi’s masterpiece represents his most impassioned response to the events that engulfed him.

The Periodic Table celebrates the pleasures of love and friendship and the search for meaning, and stands as a monument to those things in us that are capable of resisting and enduring in the face of tyranny.

PRIMO LEVI was born in Turin in 1919 to an Italian-Jewish family. Arrested as a member of the anti-Fascist resistance, he was deported to Auschwitz in 1944. After the war, Levi resumed his careers as a chemist and a writer in Turin until his untimely death in 1987. During his writing career, Levi won every distinguished prize in his native Italy. The Periodic Table, the first of his books to appear in America, was selected as one of the Best Books of 1985 by The New York Times Book Review.

“I immersed myself in The Periodic Table gladly and gratefully. There is nothing superfluous here, everything this book contains is essential. It is wonderful pure, and beautifully translated…I was deeply impressed.” –Saul Bellow

“The best introduction to the psychological world of one of the most important and gifted writers of our time.”–Italo Calvino

“A work of healing, of tranquil, even buoyant imagination.” –The New York Times Book Review

“Every chapter is full of surprises, insights, high humor, and language that often rises to poetry.” –The New Yorker

“One of the most important Italian writers.” –Umberto Eco