The Barefoot Lawyer: A Blind Man's Fight for Justice and Freedom in China (Hardcover) 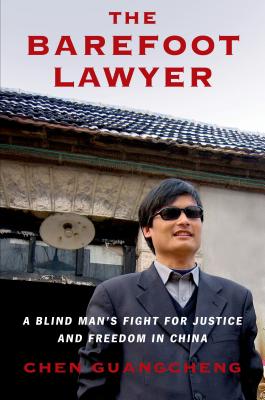 By Chen Guangcheng
Call or email to see if a used copy is available.
Out of Print

It was like a scene out of a thriller: one morning in April 2012, China's most famous political activist—a blind, self-taught lawyer—climbed over the wall of his heavily guarded home and escaped. Days later, he turned up at the American embassy in Beijing, and only a furious round of high-level negotiations made it possible for him to leave China and begin a new life in the United States.

Chen Guangcheng is a unique figure on the world stage, but his story is even more remarkable than anyone knew. The son of a poor farmer in rural China, blinded by illness when he was an infant, Chen was fortunate to survive a difficult childhood. But despite his disability, he was determined to educate himself and fight for the rights of his country's poor, especially a legion of women who had endured forced sterilizations and abortions under the hated "one child" policy. Repeatedly harassed, beaten, and imprisoned by Chinese authorities, Chen was ultimately placed under house arrest. After nearly two years of increasing danger, he evaded his captors and fled to freedom.

“[Chen's] case made worldwide headlines when he fled to the American Embassy in Beijing in 2012 [and his] book sheds important new light on both the life of this self-taught lawyer and the political winds that propelled him away from the remote village where he and his family were being kept under house arrest....His own story is a reminder that the desire for basic human rights is not a government-sponsored indulgence but rather arises from the deep well of the human spirit.” —The New York Times Book Review

“[Chen] was imprisoned for more than four years, then released into extralegal house arrest, with hundreds of state agents and hired thugs ... keeping him and his family under surveillance and isolated from the world physically and electronically. How a blind man escaped such a lockdown alone and on foot, navigating toward a neighboring village via smells and 'a kind of batlike echolocation,' is an amazing tale.” —The Wall Street Journal

“Riveting ... [Chen] offers a poignant yet inspiring account of growing up sightless in the Chinese countryside.... It is remarkable how Chen's lone voice was able to shake the state to its foundations... Chen has lived most of his life in darkness but here casts a beacon of light into the shadows.” —The Washington Post

“A fierce memoir of rural life and dissent.... The details of how, exactly, a man who might never have left the village of his birth came to see the need to confront the Chinese state says much about [Chen] but no less about his country.... A highly readable and disciplined narrative of a life unto itself.” —Evan Osnos, The New York Review of Books

“Truly inspiring ... Chen's combative spirit seems never to desert him. His flight from his village to the American embassy is gripping.... The most dramatic story of a dissident's escape from persecution in Communist-ruled China [and] a powerful reminder of how some aspects of the country remain unchanged despite its rapidly growing prosperity.” —The Economist

“Fascinating.... Chen's extraordinary tenacity is the keynote of the book.... The book movingly describes a growing consciousness of legal rights in rural China [and] contains shocking details about the horrors of the Chinese penal system.... Vital reading.” —The Guardian (London)

“An inspirational, troubling read ... The Barefoot Lawyer... offers both an absorbing story of how a determined, courageous individual can make a difference in the lives of millions and an eye-opening portrait of the desperate conditions endured by China's rural poor.... A chilling look at the unfettered power of the Communist state.” —Christianity Today

“Powerful.... Chen's danger-filled story of escape, asylum, betrayal, and then emigration to America is riveting.” —The National Review

“[A] riveting memoir … Chen has an excellent sense of pace and attention to detail, and he knows how to fill in the cultural gaps for those less familiar with China. The result is an eminently readable, albeit chilling memoir that will grip the attention of readers everywhere.” —Publishers Weekly

“Tense and tightly written, [The Barefoot Lawyer] is a suspenseful window onto Chen's struggle, with disaster constantly on the horizon.… Richly layered and vibrant, Chen's stirring tale of bravery and perseverance in the face of oppression is a moving call to arms for the ideas of human dignity and the rule of law.” —Kirkus Reviews

“An astonishing story of one man's fight to overcome personal odds for himself and for the cause of justice for the citizens of his nation.” —Booklist

“A fast-paced, eye-opening read... Chen has an unwavering belief in the power of the human spirit to persevere against oppression.” —Library Journal

“Chen Guangcheng has a life story unlike any other you will ever read. His memoir--eloquent, accessible, and necessary--is not only about his improbable path to prominence as a human-rights activist in China. It is, above all, about the universal power of will.” —Evan Osnos, author of Age of Ambition: Chasing Fortune, Truth, and Faith in the New China

“This exceptional book will join the ranks of classic accounts of individual bravery, principle, and vision in the face of cruelty and repression. Chen Guangcheng is known around the world for the daring of his escape from captivity; as The Barefoot Lawyer makes clear, his journey and the accomplishments before that were at least as remarkable. Anyone who wants to understand the struggle for China's future, being waged inside that country and by friends of China around the world, will want to read this book.” —James Fallows, national correspondent for The Atlantic Monthly and author of China Airborne

“The life story of this blind, self-taught lawyer is a morality tale for our time. Chen Guangcheng's unflinching sense of moral purpose pitted him against the might of the Chinese state, and ended up exacting an extraordinarily high price on his entire family. In his tenacious search for justice, Chen became a pawn in high-level geopolitical maneuvering between the world's two superpowers. This gripping book provides a sobering vision of the brute power of a rising China.” —Louisa Lim, author of The People's Republic of Amnesia: Tiananmen Revisited

“The Chinese government warns its citizens against ‘universal values,' calling them a Western plot. But anyone who needs evidence that notions of truth and justice are inherent in human beings everywhere need look no further than Chen Guangcheng. Born to dirt-poor conditions in a small Chinese village, barred from grade school because he was blind, Chen has the gifts of tenacious intellect and a devotion to principle so unbending that, at the end of his saga, it proves stronger than those of U.S. diplomats who are schooled in human rights.” —Perry Link, author of An Anatomy of Chinese: Rhythm, Metaphor, Politics and co-editor of The Tiananmen Papers

“Chen Guangcheng. The barefoot lawyer from rural China. Think Huckleberry Finn growing up to be Atticus Finch. In this brave and undaunted book, Guangcheng proves himself the very best kind of trouble-maker. He fights monsters. Monsters who hide behind officialdom and party uniforms. Monsters of lazy sadism who flaunt the rule of law and violently oppose any chance for human dignity. A gritty and insanely inspiring story of a man who has been through Hell and come out smiling, The Barefoot Lawyer represents the ultimate victory over cynicism and cruelty. Tyrants Beware!” —Christian Bale, actor