The Miniature World of Marvin & James (The Masterpiece Adventures #1) (Hardcover) 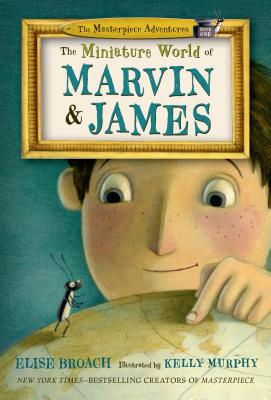 This is book number 1 in the The Masterpiece Adventures series.

Marvin is a little beetle and his best friend in the world is a boy names James. When James goes away on vacation Marvin is stuck with his cousin and Mr. Pompaday, which doesn’t sound like fun to Marvin. Can he stay out of Trouble until James gets home? A sweet story that will give readers a bugs-eye view of the world. — Krysta Piccoli

In this Masterpiece Adventure, the first in a companion series for younger readers from bestselling author Elise Broach, James is going on vacation for a week. His best friend, Marvin the beetle, has to stay at home. Without James to keep him company, Marvin has to play with his annoying cousin, Elaine. Marvin and Elaine quickly find themselves getting into all sorts of trouble—even getting trapped inside a pencil sharpener! Marvin misses James and starts to worry about their friendship. Will James still be Marvin's friend when he gets home or will James have found a new best friend?

Elise Broach is the New York Times bestselling author of Masterpiece, Shakespeare’s Secret and Desert Crossing, Missing on Superstition Mountain, the first book in the Superstition Mountain Trilogy, as well as several picture books. Her books have been selected as ALA notable books, Junior Library Guild selections, a Publishers Weekly Best Children’s Book, a New York Public Library Best Book for the Teenage, an IRA Teacher’s Choice, an E.B. White Read Aloud Award, and nominated for an Edgar Award, among other distinctions.

Ms. Broach holds undergraduate and graduate degrees in history from Yale University. She was born in Georgia and lives in the woods of rural Connecticut, walking distance from three farms, a library, a post office and two country stores.

Kelly Murphy has illustrated many books for children including Masterpiece, Alex and the Amazing Time Machine, and the Nathaniel Fludd, Beastologist books. She lives in Providence, Rhode Island.

“This winsome series debut is both a sweet story of cross-species friendship and a sobering new way to look at pencil sharpeners.” —Kirkus Reviews

“Delightful intricacies of beetle life . . . blend seamlessly with the suspenseful caper as well as the sentimental story of a complicated-but-rewarding friendship . . . Murphy's charming pen-and-ink drawings populate the short chapters of this funny, winsome novel.” —Kirkus Reviews on Masterpiece

“This marvelous story is sure to be a hit.” —School Library Journal on Masterpiece

“Despite the simplicity of Broach's pared-down sentences, the story brims with both emotion and moments of quiet wisdom.” —Publishers Weekly, starred review on Masterpiece