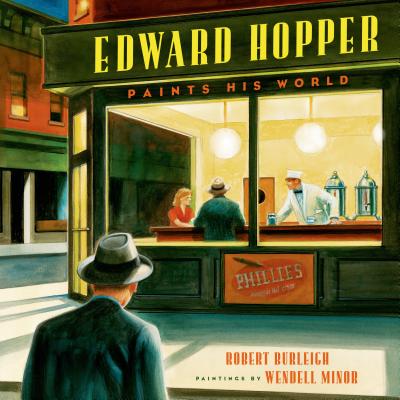 Edward Hopper knew what he wanted to be when he grew up: artist. But his journey was not always easy or a direct path to the desired result. The life of Hooper is told in a longer picture book-style story. Wendell Minor then illustrates the Robert Burleigh text in the style of Hopper himself. — Jeanette

As a boy, Edward Hopper knew exactly what he wanted to be when he grew up: on the cover of his pencil box, he wrote the words EDWARD HOPPER, WOULD-BE ARTIST. He traveled to New York and to Paris to hone his craft. And even though no one wanted to buy his paintings for a long time, he never stopped believing in his dream to be an artist. He was fascinated with painting light and shadow and his works explore this challenge.

Edward Hopper's story is one of courage, resilience, and determination. In this striking picture book biography, Robert Burleigh and Wendell Minor invite young readers into the world of a truly special American painter (most celebrated for his paintings "Nighthawks" and "Gas").

ROBERT BURLEIGH has written children's books about many well-known Americans, including Flight: The Journey of Charles Lindbergh and Who Said That? Famous Americans Speak. He lives with his wife in Chicago, Illinois.

Wendell Minor is the award-winning and bestselling illustrator of numerous books, including Ghost Ship, by Mary Higgins Clark. He lives in Washington, Connecticut.

“In a narrative as calmly straightforward as Hopper's work, Burleigh introduces the great American realist.” —The Horn Book

“Hopper was one of the foremost American painters of the 20th century, and this wonderfully illustrated book provides a detailed biographical portrait of him. Minor's art, lush and perfectly varied with pencil sketches interspersed between colorful paintings, is accompanied by Burleigh's compelling text.” —School Library Journal

“Full-page paintings reminiscent of Hopper originals accompany the straightforward text of this picture book biography from the team behind Night Flight . . . A lovely, quiet introduction to a luminary among American painters.” —Booklist

“*Two masters of illustrated, brief biographies for young people reunite . . . an enduring and inspiring book that will help kids to understand the why and how of an artist at work.” —Kirkus Reviews, STARRED REVIEW

“In many scenes, readers peer over Hopper's shoulder as he works, seeing what he sees. The accessible narrative then invites the audience to think more critically about the context in which Hopper created.” —Publishers Weekly, starred review

“Minor's sweet, verdant watercolors shine.” —The Boston Globe on If You Spent a Day with Thoreau at Walden Pond

“Offers a glimpse of Thoreau's philosophy that young children can understand.” —School Library Journal on If You Spent a Day with Thoreau at Walden Pond

“A fine introduction to the value of Thoreau and the natural world.” —Kirkus Reviews on If You Spent a Day with Thoreau at Walden Pond

“Poignantly imagines a father and son paying their respects on the prairie.” —USA Today on Abraham Lincoln Comes Home

“Moving prose and dramatic night scenes show them as part of a grieving yet grateful nation, paying homage to a fallen hero.” —San Francisco Chronicle on Abraham Lincoln Comes Home

“This quiet, lovely book sensitively communicates a sense of the magnitude of loss felt by so many.” —Kirkus Reviews on Abraham Lincoln Comes Home