Betsy Ross and the Making of America (Hardcover) 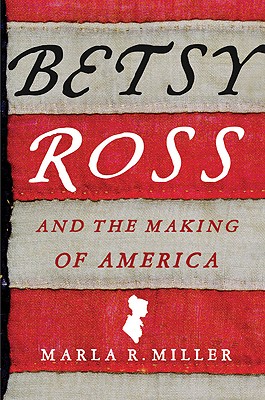 A trifecta of excellence. 1.)Brilliant story of a long and eventful life that historians thought could not be recovered. 2.) Vibrant portrait of a city in transition from the colonial period through the tumult of war and into the early republican era. 3.) Classic study of an extended family that made and remembered history. — Bill Lewis

A richly woven biography of the beloved patriot Betsy Ross, and an enthralling portrait of everyday life in Revolutionary War-era Philadelphia

Betsy Ross and the Making of America is the first comprehensively researched and elegantly written biography of one of America's most captivating figures of the Revolutionary War. Drawing on new sources and bringing a fresh, keen eye to the fabled creation of "the first flag," Marla R. Miller thoroughly reconstructs the life behind the legend. This authoritative work provides a close look at the famous seamstress while shedding new light on the lives of the artisan families who peopled the young nation and crafted its tools, ships, and homes.

Betsy Ross occupies a sacred place in the American consciousness, and Miller's winning narrative finally does her justice. This history of the ordinary craftspeople of the Revolutionary War and their most famous representative will be the definitive volume for years to come.

Marla R. Miller is an associate professor of history at the University of Massachusetts, Amherst and the director of the public history program there. She has won the Organization of American Historians' Lerner-Scott Prize for the Best Dissertation in Women's History and the Walter Muir Whitehill Prize in Colonial History. In 2009, she was awarded the Patrick Henry Writing Fellowship from the C. V. Starr Center for the Study of the American Experience.

"What a fascinating book! Marla Miller looks closely at Betsy Ross and places her in the context of her Philadelphia. We learn of the contributions of the artisans and tradespeople to the Revolution and beyond as we witness them surviving the British occupation, rejoicing in American victory, suffering through yellow fever epidemics, reveling in their status as the capital city. And we can't help but marvel at the woman at the center of the story--Betsy Griscom Ross Ashburn Claypoole --as she runs her business, buries three husbands, raises her own large family plus those of her sisters, and provides flags for the new nation." --Cokie Roberts, author of Founding Mothers and Ladies of Liberty

"Marla Miller's Betsy Ross and the Making of America is a stupendous literary achievement. It's not easy to accurately write about a real folk legend. Miller does so with historical accuracy, vivid descriptive language, and an encyclopedic knowledge of her subject. The Revolutionary War era comes alive in these fine pages!" --Douglas Brinkley, author of The Wilderness Warrior: Theodore Roosevelt and the Making of America

"Marla Miller's incandescent biography of Betsy Ross is a joy to read. She brings alive an ordinary Philadelphia woman who is far more interesting than the mythical seamstress of the first American flag. Through prodigious research and elegant writing, Miller chronicles the life of a thrice-married woman so vividly that the entire world of women and work, family and church, and war and politics in revolutionary and post-revolutionary Philadelphia comes alive. Surprise after surprise tumble from the pages of this beautifully stitched account, where the importance of everyday women and men in the birth of the nation becomes abundantly evident."--Gary B. Nash, author of The Unknown American Revolution: The Unruly Birth of Democracy and the Struggle to Create America

"Some might think that Betsy Ross is merely America’s most famous seamstress. Marla Miller brings her to life in all her glory and in the rich context of Revolutionary America. Moreover, she does so in a prose style that is accessible, compelling, at times even lyrical."--Joseph J. Ellis, author of the forthcoming First Family: Abigail and John Adams

"In an engaging biography, Miller shows that even though the flag story is riddled with improbabilities, the life of the woman who came to be known as Betsy Ross is worth recovering . . . Through skillful use of small details, Miller sustains her repeated assertion that the future Betsy Ross was often 'only a handshake away' from the men who made the Revolution . . . Miller's admiring biography will warm the hearts of those who love the Betsy Ross legend. It may also convince skeptics (Miller refers to them as 'naysayers') that there is something in the flag stories worth considering."--Laurel Thatcher Ulrich, The New York Times

"A detailed portrait of the woman credited with the creation of the Stars and Stripes…With copious notes and an extensive bibliography, Miller provides an exhaustive picture of the life of a craftswoman in colonial times."--Kirkus Reviews

"Through wide-ranging research and a skillfully crafted narrative, Miller has not only broadened our understanding of Elizabeth Griscom Ross Ashburn Claypoole but also the men and women of revolutionary America who 'went to work every day and took pride in a job well done.' Recounted are rich scenes from the City of Brotherly Love ranging from revolutionary upheaval to the yellow fever epidemic of 1793. With this distinct and persuasive biography, Miller weaves Ross into the fabric of the rich revolutionary tapestry. Fans of Woody Holton's Abigail Adams and Mary Beth Norton's Liberty's Daughters: The Revolutionary Experience of American Women, 1750–1800 will be drawn to Miller's compelling account."--Brian Odom, Library Journal

"Miller has written a deeply researched and cogently argued gem of a book that gives us Betsy Ross as a complete person, not just a colonial character with a one-sentence claim on our attention."--Marc Leepson, The Wall Street Journal

"This first-rate biography of Ross (1752-1836) is authoritative and engrossing nad goes a long way toward recovering the history of early American women and work."--Publisher’s Weekly

"In this admiring biography, a historian shows that the life of the real woman behind the flag legend is well worth recovering"--The New York Times Book Review

"The excitement of this book derives from Miller’s expert ability to sort fact from fiction, drawing on a wide range of documentary sources to show how Ross and other colonial women contributed to the nation’s culture and economy at the dawn of the republic."--Jonathan Lopez, The Associated Press

"A rich biography of the woman behind the myth, [Miller] ably demonstrates why Ross merits study in her own right."--Michael Kenney, The Boston Globe

"With this book, Miller reveals a refreshing new model of a colonial woman – one that encompasses business, politics, education, and war, as well as religion and family. Was Betsy Ross a central figure to the story of the American Revolution? No, but Marla Miller’s book demonstrates that she was an essential figure in the making of this new nation – flag or no flag."--Sioban Conaty, The Philadelphia Inquirer

"In this first scholarly biography of Ross, Miller uses what we do know to build a compelling portrait of a community and a nation...How much of Ross' story is fact and how much is fiction doesn't matter in this richly detailed biography. It's all fascinating."--Carol Memmott, USA TODAY