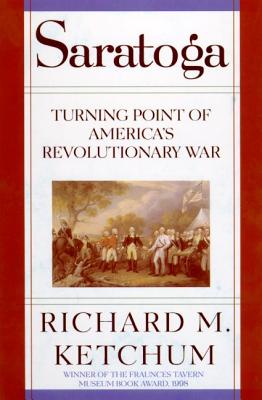 By Richard M. Ketchum
$24.99
Click Title for IN STOCK Location

The story of this famous battle, told through the eyes of the combatants. The compelling narrative and thorough research bring the people and era alive in this wonderful book that was selected as a New York Times Notable Book of the Year in 1997. Ketchum shows how the rag-tag Colonial army prevented Burgoyne from dividing the colonies and gaining control of the Hudson. He has used original letters, diaries and field documents to show why this battle was so important. Ketchum is also the author of Decisive Day: the Battle for Bunker Hill and The Winter Soldiers: The Battles for Trenton and Princeton. — Louise Jones

In the summer of 1777 (twelve months after the Declaration of Indepence) the British launched an invasion from Canada under General John Burgoyne. It was the campaign that was supposed to the rebellion, but it resulted in a series of battles that changed America's history and that of the world. Stirring narrative history, skillfully told through the perspective of those who fought in the campaign, Saratoga brings to life as never before the inspiring story of Americans who did their utmost in what seemed a lost cause, achieving what proved to be the crucial victory of the Revolution.

Richard M. Ketchum (1922-2012) is the author of the Revolutionary War classics Decisive Day: The Battle of Bunker Hill; The Winter Soldiers: The Battles for Trenton and Princeton; the award-winning New York Times Notable Book Saratoga: Turning Point of America's Revolutionary War; and, most recently, Divided Loyalties: How the American Revolution Came to New York. He lived in Vermont.

“This is superbly researched, full-scale narrative history at its best.” —David McCullough

“More than a brilliant, gripping account of one of history's most important battles; it is a vivid, needed reminder of how hard-fought, gritty, sweat-soaked, god-awful, heroic, and all-important was the American War. Like Shelby Foote unfolding the drama of the Civil War, Richard M. Ketchum writes of the Revolution as if he had been there . . . No novelist could create characters more memorable than the protagonists on both the American and British sides . . . This is superbly researched, full-scale narrative history at its best.” —David McCullough, author of John Adams