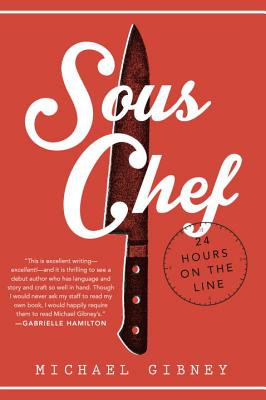 A frantic, sweaty-palms look at a day in the life of a Sous Chef. Told with a keen understanding of the restaurant industry, in tantalizing language. The food is described so lovingly, and the pace is so frenetic, you'll be equal parts exhausted and hungry by the end! Great for people who actually work in the industry, or just us armchair chefs who love to watch Gordon Ramsay yell at people. — Chris Linendoll

NAMED ONE OF THE TEN BEST NONFICTION BOOKS OF THE YEAR BY "TIME
""
The back must slave to feed the belly. . . . "In this urgent and unique book, chef Michael Gibney uses twenty-four hours to animate the intricate camaraderie and culinary choreography in an upscale New York restaurant kitchen. Here readers will find all the details, in rapid-fire succession, of what it takes to deliver an exceptional plate of food the journey to excellence by way of exhaustion.
Told in second-person narrative, "Sous Chef" is an immersive, adrenaline-fueled run that offers a fly-on-the-wall perspective on the food service industry, allowing readers to briefly inhabit the hidden world behind the kitchen doors, in real time. This exhilarating account provides regular diners and food enthusiasts alike a detailed insider's perspective, while offering fledgling professional cooks an honest picture of what the future holds, ultimately giving voice to the hard work and dedication around which chefs have built their careers.
In a kitchen where the highest standards are upheld and one misstep can result in disaster, "Sous Chef" conjures a greater appreciation for the thought, care, and focus that go into creating memorable and delicious fare. With grit, wit, and remarkable prose, Michael Gibney renders a beautiful and raw account of this demanding and sometimes overlooked profession, offering a nuanced perspective on the craft and art of food and service.
Praise for "Sous Chef"
This is excellent writing "excellent " and it is thrilling to see a debut author who has language and story and craft so well in hand. Though I would never ask my staff to read my own book, I would happily require them to read Michael Gibney's. Gabrielle Hamilton
Michael] Gibney has the soul of a poet and the stamina of a stevedore. . . . Tender and profane, his book will leave you with a permanent appreciation for all those people who desire to feed, to nourish, to dish out the tasty bits of life. "The New York Times Book Review"
A terrific nuts-and-bolts account of the real business of cooking as told from the trenches. No nonsense. This is what it takes. Anthony Bourdain
A wild ride, not unlike a roller coaster, and the reader experiences all the drama, tension, exhilaration, exhaustion and relief that accompany cooking in an upscale Manhattan restaurant. " USA Today"
Vibrantly written. "Entertainment Weekly"
Sizzling . . . Such culinary experience paired with linguistic panache is a rarity. "The Daily Beast"
""
Reveals the high-adrenaline dance behind your dinner. NPR.

Michael Gibney began working in restaurants at the age of sixteen and assumed his first sous chef position at twenty-two. He ascended to executive sous chef at Tavern on the Green, where he managed an eighty-person staff. He has worked in the kitchens of Morgans Hotel Group, 10 Downing in Manhattan, and Governor in Brooklyn s DUMBO, among many others. Over the course of his career, he has had the opportunity to work alongside cooks and chefs from many of the nation s best restaurants, including Alinea, Per Se, Eleven Madison Park, Daniel, Jean Georges, Le Bernardin, Bouley, Ducasse, Corton, wd 50, and Momofuku. In addition to his experience in the food service industry, Gibney also holds a BFA in painting from Pratt Institute and an MFA in nonfiction writing from Columbia University. He lives in Brooklyn, New York."

“A terrific nuts-and-bolts account of the real business of cooking as told from the trenches. No nonsense. This is what it takes.”—Anthony Bourdain

“Michael Gibney’s you-are-there Sous Chef is one of the most informative, funny, and transparent books about the restaurant biz ever written.”—Bret Easton Ellis

“This is excellent writing—excellent!—and it is thrilling to see a debut author who has language and story and craft so well in hand. Though I would never ask my staff to read my own book, I would happily require them to read Michael Gibney’s.”—Gabrielle Hamilton, author of Blood, Bones & Butter

“Sous Chef is a marvelous, superbly written, intelligent, and accomplished book. I know no other book that so vividly renders the experience and complexity of life in a big restaurant kitchen. The sheer amount of knowledge demonstrated here of the particulars of cooking is immense, and the dynamic, seesaw relationship between chef and sous chef is especially well achieved. I was gripped by the author’s culinary passion and literary sophistication. Bravo!”—Phillip Lopate

“A good cook chooses ingredients carefully, just as a writer must select the right words. Michael Gibney is a word cook of the highest order, and this book will leave you licking your fingers.”—Gary Shteyngart

“Gibney is as skilled with words as he is with his 11-inch Sujihiki knife.”—Publishers Weekly (starred review)