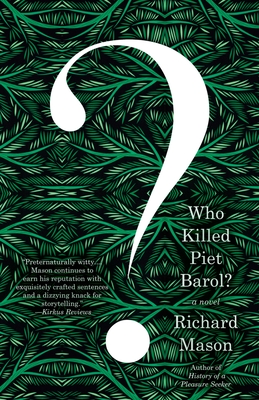 One of the Best Books of the Year: Newsday, The Times, The Observer, Mail on Sunday

This “gorgeous treat of a novel” (The Times, Book of the Month) is a funny, sexy, irreverent, and intensely moving portrait of what unites human beings when their sacred mysteries are blown apart. Avoiding the trauma of the First World War, Piet Barol heads into Africa’s greatest forest. With a business to build and secrets to escape, he’s running out of time to make his own luck. His African guides have reasons of their own for taking him to their ancestral lands – where he finds a prize beyond his wildest imaginings.

To get it, he must use every weapon at his disposal. As the story moves to its devastating conclusion, every character becomes a suspect, and Piet’s gamble sets him on a collision course with forces he cannot control. An exquisite, deeply human tale of temptation and theft, set against the extraordinary backdrop of history in the making, Who Killed Piet Barol? affirms Richard Mason’s place among the great writers of our time.

Richard Mason is the author of The Drowning People (winner of Italy’s Grinzane Cavour prize for Best First Novel), Us, Natural Elements, and History of a Pleasure Seeker. He’s been long-listed for the IMPAC Dublin Library Award, and short-listed for the Sunday Times Literary Award and a Lambda Literary Award. Mason has written for European editions of Vanity Fair; American, British, and Italian Vogue; the London Times, The Guardian, the Evening Standard, Tatler, and The New York Times.

To write this book, Mason founded Project Lulutho, a center for green farming in South Africa’s rural Eastern Cape, and spent a year living under canvas—learning the language and culture of the Xhosa people.

Search Who Killed Piet Barol? on YouTube to watch the story of the creation of this novel.

“Exquisite and gripping.” —The Observer (London)

“Richard Mason's gripping prose and psychological insight have marked him out as one of the outstanding writers of his generation. Utterly entrancing . . . An epic narrative in which human failure and decency are opposing forces in this riveting morality tale.” —Geordie Greig, Editor, Mail on Sunday

“Marquez-like. . . . Mason elegantly rotates between characters (and animals) with wisdom, pathos and real humour, gently but thoroughly exploring race and identity at a moment of huge political turmoil: a grand success, entirely on its own terms.” —Press Association

“A gorgeous treat of a novel, full of contradictions and subtleties. The complicated love-hate, race-stained relationship between Piet and Luvo and Ntsina is worth the cover price alone.” —The Times (London), Book of the Month

"Richard Mason is a writer not to be missed." —Cosmopolitan (Italy)

“This is one of the finest novels I have read for many years. It has at its centre truth and beautiful prose: it doesn’t get much better than that.” —Jennifer Crocker, The Cape Times

“A stunning tour de force that will leave you gripped, moved and inspired. A richly atmospheric historical novel that says much about the way we live now. Who Killed Piet Barol? is a book to read again and again: a compelling story written in luminous prose with vividly-realised characters . . . A writer at the height of his powers.” —Alex Preston, author of In Love and War

“Mesmerizing. . . . Enthralling. . . . Will grip the reader from the opening sentences to its shattering climax. . . . A creation by a writer of exquisite talent.” —Bookreporter

“Vivid . . . . Eloquent, sensuous prose. . . . Mason imbues the forest with life, taking readers inside the psyche of each tree, animal, or insect, as it senses the looming danger.” —Library Journal (starred review)

“Subtly captures the reader’s heart. Then breaks it. . . . The novel turns the question posed by the title into a philosophical theme. Luminously reminiscent of Chinua Achebe’s Things Fall Apart and recalling the disastrous culture clash of Barbara Kingsolver’s Poisonwood Bible.” —Booklist (starred review)

“Mason continues to earn his reputation with exquisitely crafted sentences and a dizzying knack for storytelling.” —Kirkus Reviews

“An ambitious tale of colonial greed. . . . Mason unspools a story rich in detail and populated with deeply flawed characters whose lives intersect in the once-pristine forest that inspires acts sacred and profane. Mason handles multiple story lines with an élan of a seasoned raconteur.”
—Publishers Weekly