You Herd Me!: I'll Say It If Nobody Else Will (Hardcover) 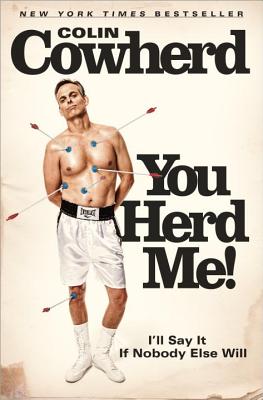 "There are really two games, the one you see and the one you don't. The way I see it, the best way to use access to both worlds is to illuminate and reveal, not idolize and adore. It's better to be wrong than to be played for a fool. Colin Cowherd"
In this age of billion dollar athletic marketing campaigns, feel good philosophy with no connection to reality, and a Sports Media echo chamber that's all too eager swallow whatever idiotic notion happens to be in vogue at the moment, it's tough to find people who aren t afraid to say what they re really thinking.
But that's where Colin Cowherd comes in. As his millions of fans on ESPN Radio and ESPNU already know, Colin is the rare sports analyst who's brave (or crazy) enough to speak his mind even if it pisses some people off. Of course, it helps that a lot of what Colin has to say is simply hilarious. Lots of writers can tell you about Boston's storied sports history. But how many can tell you why the city of Boston is America's five year old? Lots of writers will brag about the stuff they got right, but how many will happily list all the calls they got completely and utterly wrong? Whether he's pointing out the stupidity of conspiracy theories, explaining why media bias isn t nearly as big a deal as many assume, or calling out those who prize short term wins over sustainability, Colin is smart, thought-provoking, and laugh-out-loud funny. Some of the questions he's not afraid to ask in "You Herd Me " include:
Is Tiger Woods "really" a sex addict or does he just have good PR?
Is work-life balance "really" the ideal we should all strive for or is that just a way for people feel better about mediocrity?
Is talent "really" all it's cracked up to be or can too much talent actually be counterproductive?
Is the X games "really" a sport or would we all be better off if we admitted it's something else entirely?
Is Hell "really "a supernatural place of fire and brimstone or is it actually just another word for living in Tampa?
Unapologetically entertaining and packed with behind-the-scenes insights you won t get anywhere else, "You Herd Me " is unlike any other sports book ever written.

COLIN COWHERD is currently the host of The Herd with Colin Cowherd on ESPN Radio and ESPNU. He is also a former cohost of the show SportsNation on ESPN2.