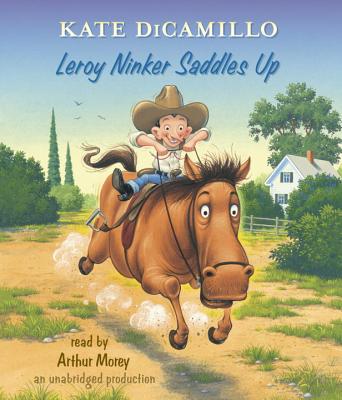 This is book number 1 in the Tales from Deckawoo Drive series.

Kate has answered our call for more Mercy Watson books with a new series featuring characters from Mercy's books. Leroy Ninker wants to be a cowboy. He has boots, a hat, and a rope. Everything except a horse- until he meets Maybelline. But Maybelline has three very important rules, and Leroy will have to follow them if he wants to keep this equine wonder. Pop a bowl of buttered popcorn or cook up some spaghetti and curl up with this delightful book! — Marika McCoola

Leroy Ninker has a hat, a lasso, and boots. What he doesn’t have is a horse—until he meets Maybelline, that is, and then it’s love at first sight. Maybelline loves spaghetti and sweet nothings, and she loves Leroy, too. But when Leroy forgets the third and final rule of caring for Maybelline, disaster ensues. Can Leroy wrestle fate to the ground, rescue the horse of his heart, and lasso loneliness for good? Join Leroy, Maybelline, and a cast of familiar characters—Stella, Frank, Mrs. Watson, and everyone’s favorite porcine wonder, Mercy—for some hilarious and heartfelt horsing around on Deckawoo Drive.

Kate DiCamillo, the author of six books about Mercy Watson, is the beloved and renowned author of many books for young readers, including Flora & Ulysses: The Illuminated Adventures and The Tale of Despereaux, both of which won Newbery Medals. In 2014 she was named the National Ambassador for Young People’s Literature. She lives in Minneapolis.