A World of Wonders: Geographic Travels in Verse and Rhyme (Hardcover) 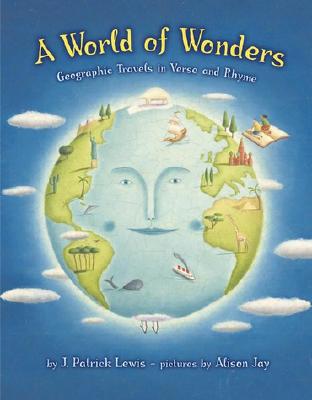 By J. Patrick Lewis, Alison Jay (Illustrator)
$16.99
Hard to Find - May no longer be available

Alison Jay's fun illustrations add to these delightful poems that teach geography in a fun and exciting way. Ever seen a poem shaped like the Italian boot? Or floated away on Angels Falls? Fun for all ages. — Jeanette

Could anyone somersault across the San Andreas fault? Why was Hawaii named after a Sandwich? Of longitude and latitude, which has more "flatitude"?

You'll travel the globe (and some of the sky) discovering answers to these and other questions you never knew to ask! There are all sorts of amazing things to know about thousands of "spaces and places to be" within the fantastical world of GE-OG-RA-PHY. Dive in, come aboard, zip along, take it slow-traveling by book is a great way to go!

J. Patrick Lewis earned his Ph.D. in Economics at The Ohio State University (1974) and taught at Otterbein College in Westerville, Ohio until 1998. In 1972-73 he and his family spent the academic year in the former USSR, where Lewis completed his doctoral dissertation as an International Research and Exchanges (IREX) Fellow.

Lewis has published extensively in the field of Economics. His articles and reviews have appeared in numerous academic journals, as well as The Nation, The Progressive, Technology Review, Chicago Tribune, San Francisco Chronicle, Cleveland Plain Dealer and other newspapers and magazines. He has had seven short stories and over seventy poems published in literary journals. In 1991 he was awarded an Ohio Arts Council Individual Artist Grant for his adult poetry.

He is now remarried and lives in Chagrin Falls, Ohio, with his wife Susan and step-children, Kelly and Scott Marceau. Lewis makes forty elementary school visits a year, keynotes at literature conferences, and presents teachers' workshops on introducing poetry in the classroom.

Lewis has also published twenty-five children's picture books to date (1/00), seventeen of them children's poetry. Ten more children's books have been accepted and are now in production at Simon & Schuster/Atheneum, Penguin Putnam/Dial, Alfred A. Knopf, Creative Editions, and DK Publishing.