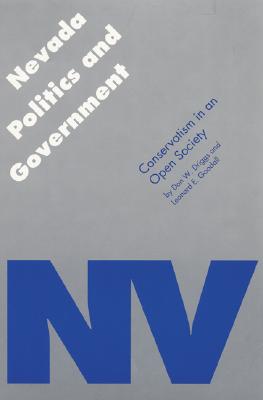 Nevada’s highly individualistic political culture has produced a conservative political philosophy in an open society. Economic developments resulting from mining and gambling reinforced and heightened the individualistic ethic that many early settlers brought to the frontier state. This ethic is also evident in the opposition of most Nevadans to big government, big labor, and big business. Belief in limited government partially explains the apparent anomaly of the electorate’s backing a pro-choice position on abortion while opposing the Equal Rights Amendment.

The book discusses the important roles played by Nevada’s present U.S. senators in two of the state’s ongoing controversies with the federal government: the longstanding water rights dispute between Native Americans, backed by the federal government, and Nevada’s ranchers; and the decade-long fight against the establishment of the nation’s first permanent nuclear waste depository at Yucca Mountain.

Don W. Driggs is Professor of Political Science Emeritus at the University of Nevada, Reno. He is the author of The Constitution of the State of Nevada: A Commentary. Leonard E. Goodall is a professor of management and public administration at the University of Nevada, Las Vegas. He is the author of numerous works, including State Politics and Higher Education.