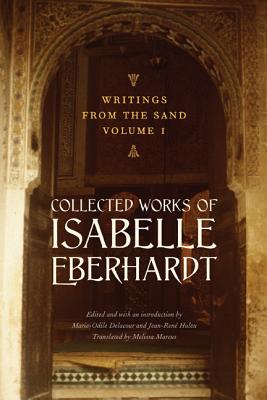 Born in 1877 in Geneva, Switzerland, Isabelle Eberhardt became a rebel at an early age. She dressed like a man so she could have access to areas forbidden to women, smoked in public, and scandalized Genevan society. Already multilingual (French, German, and Russian), she began studying Arabic language and Islamic culture and eventually converted to Islam and joined a Qadiriyya Sufi brotherhood. Eberhardt traveled throughout North Africa and wrote about her experiences in short stories, journals, and reflections. She married an Algerian and led a legendary and stormy life that included subversive political anarchism, the mysticism of Islam, numerous love affairs, and most importantly, writing unmatched by her contemporaries.
Writings from the Sand, Volume 1, at once the document of a remarkable life and a literary treasure, appears here in English for the first time. Volume 1, including journals, diary entries, and observations of life in North Africa, offers a view of the culture and people of French Algeria rarely seen by outsiders—the peasants, prostitutes, mystics, criminals, and other marginalized members of a colonized society. This translation brings to life a brilliant woman ahead of her time while also raising questions—about North African history, colonialism, gender representation, and writing—that resonate in our day.

Isabelle Eberhardt (1877–1904) died at the age of twenty-seven in a flash flood in the desert town of Aïn Sefra, Algeria.
Melissa Marcus is professor emerita of French at Northern Arizona University. She is the translator of Fawzia Assaad’s Layla, An Egyptian Woman and Malika Mokeddem’s The Forbidden Woman (Nebraska, 1998).

"This collection is an important additionto the literary canon and will be essential for literary theorists, biographers, and historians. It will also appeal to contemporary readers who will relate to the wanderlust spirit and find their values of freedom and independence reflected here."—Shoilee Khan, ForeWord Reviews

"[Writings from the Sand, Volume 1] is a splendid chronological compendium of Isabelle Eberhardt's life and writings about all that fascinated her."—Daniel P. King, World Literature Today