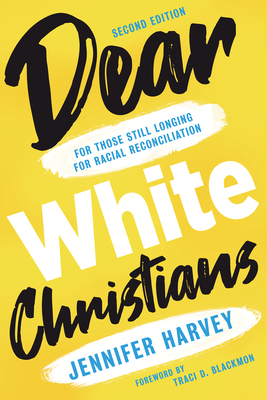 With the troubling and painful events of the last several years--from the killing of numerous unarmed Black men and women at the hands of police to the rallying of white supremacists in Charlottesville--it is clearer than ever that the reconciliation paradigm, long favored by white Christians, has failed to heal the deep racial wounds in the church and American society. In this provocative book, originally published in 2014, Jennifer Harvey argues for a radical shift away from the well-meaning but feeble longing for reconciliation toward a robustly biblical call for reparations.

Now in its second edition--with a new preface addressing the explosive changes in American culture and politics since 2014, as well as an appendix that explores what a reparations paradigm can actually look like--Dear White Christians calls justice-committed Christians to do the gospel-inspired work of opposing racist social structures around them. Harvey's message is historically and scripturally rooted, making it ideal for facilitating the difficult but important discussions about race that are so desperately needed in churches and faith-centered classrooms across the country.

Jennifer Harvey is professor of religion at Drake University, Des Moines, Iowa. Her other books include Raising White Kids: Bringing Up Children in a Racially Unjust America and Whiteness and Morality: Pursuing Racial Justice through Reparations and Sovereignty.