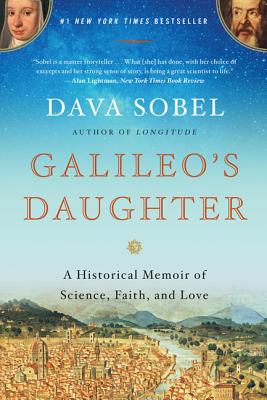 This book is extraordinary. A primer on Galileo's science, the fierce battle between religion and discover, and the power of love between father and daughter. HIGHEST RECOMMENDATION. — Bill Lewis

Inspired by a long fascination with Galileo, and by the remarkable surviving letters of his daughter Maria Celeste, a cloistered nun, Dava Sobel has crafted a biography that dramatically recolors the personality and accomplishments of a mythic figure whose early-seventeenth-century clash with Catholic doctrine continues to define the schism between science and religion-the man Albert Einstein called "the father of modern physics-indeed of modern science altogether." It is also a stunning portrait of Galileo's daughter, a person hitherto lost to history, described by her father as "a woman of exquisite mind, singular goodness, and most tenderly attached to me."

Moving between Galileo's grand public life and Maria Celeste's sequestered world, Sobel illuminates the Florence of the Medicis and the papal court in Rome during the pivotal era when humanity's perception of its place in the cosmos was about to be overturned. During that same time, while the bubonic plague wreaked its terrible devastation and the Thirty Years' War tipped fortunes across Europe, Galileo sought to reconcile the Heaven he revered as a good Catholic with the heavens he revealed through his telescope. Filled with human drama and scientific adventure, Galileo's Daughter is an unforgettable story.

"[Sobel] shows herself a virtuoso at encapsulating the history and the politics of science. Her descriptions of Galileo's ideas...are pithy, vivid, and intelligible."-Wall Street Journal

Dava Sobel (born June 15, 1947) is the author of Longitude, Galileo's Daughter, The Planets, and A More Perfect Heaven: How Copernicus Revolutionized the Cosmos. A former staff science reporter for The New York Times, she has also written for numerous magazines, including Discover, Harvard Magazine, Smithsonian, and The New Yorker.

Her most unforgettable assignment at the Times required her to live 25 days as a research subject in the chronophysiology lab at Montefiore Hospital, where the boarded-up windows and specially trained technicians kept her from knowing whether it was day outside or night.

Her work has won recognition from the National Science Board, which gave her its 2001 Individual Public Service Award "for fostering awareness of science and technology among broad segments of the general public." She also received the 2004 Harrison Medal from the Worshipful Company of Clockmakers in England and the 2008 Klumpke-Roberts Award from the Astronomical Society of the Pacific for "increasing the public understanding and appreciation of astronomy."

A 1964 graduate of the Bronx High School of Science, she has taught several seminars in science writing at the university level, and held a two-year residency at Smith College in fall 2013.

“Sobel is a master storyteller.... What she has done, with her choice of excerpts and her strong sense of story, is bring a great scientist to life.” —Alan Lightman, New York Times

“[Sobel] shows herself a virtuoso at encapsulating the history and the politics of science. Her descriptions of Galileo's ideas... are pithy, vivid, and intelligible.” —Wall Street Journal

“Sobel does wonders clearly explaining scientific principles... [She] is a most original writer, with a reverence for history and storytelling.” —USA Today

“Galileo's Daughter is a remarkable work for the beauty of the writing and the clarity of the time and relationships it creates. Sobel pays close attention to fine detail, resulting in a work that feels real.” —Denver Post