The Accidental Feminist: How Elizabeth Taylor Raised Our Consciousness and We Were Too Distracted by Her Beauty to Notice (Paperback) 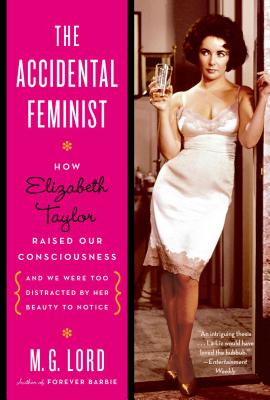 By M. G. Lord
Call or email to see if a used copy is available.
Out of Print

This truly is an engaging and insightful critique of Elizabeth Taylor and her work. You don't need to be a feminist film scholar to appreciate Elizabeth Taylor's feminist implications in her films and theatre roles. Lord accessibly critiques Taylor's films through the Second Wave Feminist lens; that is, feminism defined as fighting for sexual, economic, and domestic equality. Basic rights women (and men) take for granted today, such as access to safe healthcare and abortions, women's inclusion in professional sports, and freedom for women to live their own lives outside of their husband and children are portrayed in some of Taylor's most notable works. During an era where the Production Codes determined the final script of movies, Taylor and her directors worked around them by utilizing the "feminine, weak" quality of non-verbal communication to relay vital (if controversial) information to the audience. Lord makes the case that Taylor displayed feminist qualities off-screen as well; after 1961, she chose which projects she would undertake, she was often the sole provider for her family, and Taylor embodied many of Virginia Woolf's feminist principles. Taylor's feminism both on- and off-screen are beautifully showcased in this well-written biography that is sure to please the fans of the late Elizabeth Taylor. — Jess Hanlon

Countless books have chronicled the life of Elizabeth Taylor, but rarely has her career been examined from the point of view of her on-screen persona. That persona, argues M. G. Lord, has repeatedly introduced a broad audience to feminist ideas.

In her breakout film, "National Velvet" (1944), Taylor's character challenges gender discrimination: Forbidden as a girl to ride her beloved horse in an important race, she poses as a male jockey. Her next milestone, "A Place in the Sun" (1951), can be seen as an abortion rights movie--a cautionary tale from a time before women had ready access to birth control. In "Butterfield 8" (1960), for which she won an Oscar, Taylor isn't censured because she's a prostitute, but because she chooses the men: she controls her sexuality, a core tenet of the third-wave feminism that emerged in the 1990s. Even "Who's Afraid of Virginia Woolf?" (1966) depicts the anguish that befalls a woman when the only way she can express herself is through her husband's stalled career and children. Other of Taylor's performances explore similar themes.

The legendary actress lived her life defiantly in public--undermining post-war reactionary sex roles; helping directors thwart the Hollywood Production Code, which restricted film content from 1934 to 1966; fund-raising for AIDS research in the 1980s; championing the right of people to love whomever they love, regardless of gender. Yet her powerful feminist impact has been hidden in plain sight. Drawing on unpublished letters and scripts, and on interviews with Kate Burton, Gore Vidal, Austin Pendleton, Kevin McCarthy, Liz Smith, and others, The Accidental Feminist will surprise readers with its originality, adding a startling dimension to the star's enduring mystique.

M.G. Lord is an acclaimed cultural critic and investigative journalist, and the author of the widely praised books Forever Barbie and Astro Turf: The Private Life of Rocket Science. Since 1995 she has been a frequent contributor to the New York Times Book Review and the Times's Arts & Leisure section. Her work has appeared in numerous publications, including The New Yorker, Vogue, the Wall Street Journal, the Los Angeles Times, Travel + Liesure, the Hollywood Reporter, and ArtForum. Before becoming a freelance writer, Lord was a syndicated political cartoonist and a columnist for Newsday. She teaches at the University of Southern California and lives in Los Angeles.