Grief of My Heart: Memoirs of a Chechen Surgeon (Paperback) 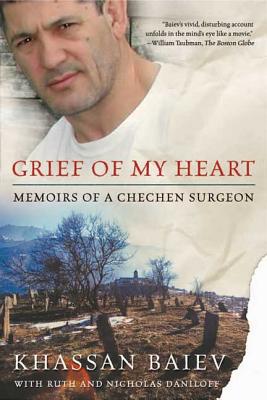 A Booklist Editor's Choice for 2003

In this riveting memoir, Khassan Baiev relates his harrowing experiences as a surgeon in one of the worst war zones of the last decade.

When the hospital where Baiev worked in Grozny, the Chechen capital, was destroyed by Russian shelling, he returned to his nearby hometown of Alkhan Kala and restored an abandoned clinic with help from villagers. Soon he was the only doctor for tens of thousands of residents and refugees in the surrounding area. During six years of war and intermittent ceasefire, he often worked without gas, electricity, or running water, with only local anesthetics and homemade medical supplies.

Although he treated mainly civilians, Baiev upheld the Hippocratic Oath by also caring for Russian soldiers and Chechen fighters alike--a practice that branded him a traitor by both sides. Kidnapped and nearly killed on several occasions, Baiev finally fled Chechnya in 2000 and won political asylum in the United States.
An important eyewitness account of the reality of the Chechen-Russian conflict, which has killed 20 percent of the Chechen population, made homeless another 350,000, and seen the deaths of thousands of Russian soldiers. Grief of My Heart is a searing memoir that is certain to become a classic in the literature of war.

“With its intimate portrait of a shamefully neglected region, it is at once eye-opening and deeply affecting.” —Sheri Fink, author of War Hospital

“Spectacular...a detailed account of the effects of modern warfare on its victims.” —Christian Caryl, The New York Review of Books

“Baiev's vivid, disturbing account unfolds in the mind's eye like a movie. His extraordinary empathy for both sides is inspiring.” —William Taubman, The Boston Globe

“Baiev's narrative lends itself to multiple readings….He portrays the full, agreeable existence of a proud people, thoroughly suffused by tight family allegiances and human warmth. Then he shows their lives shattered by war.” —The Washington Post Book World