A Cry from the Far Middle: Dispatches from a Divided Land (Hardcover) 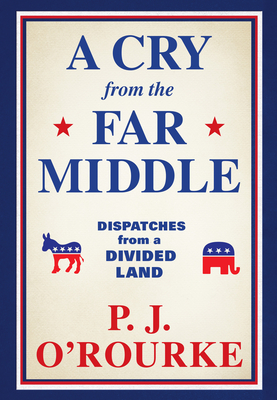 Observations on the present political moment, and the discord that defines it, from the best man for the job: bestselling author and acclaimed satirist P.J. O'Rourke

P. J. O'Rourke says we've worked ourselves into a state of anger and perplexity, and it's no surprise because perplexed and angry are what Americans have been since the Roanoke Colony got lost. This astute and entertaining look at the state of these United States includes essays on everything from our fraught history ("Oh Beautiful for . . . Pilgrim Feet?") to the political effects of social media, ("Whose Bright Idea Was It to Make Sure that Every Idiot in the World Is in Touch with Every Other Idiot?"). A plan is advanced to reform federal poverty programs, "Just Give Them the Money." And a rant is made against the "Internet of Things" because your juicer is sending fake news to your Fitbit about what's in your refrigerator.

Included is a quiz to determine whether you're a "Coastal" or a "Heartlander" (you know organic, fair-traded, locavore, and gluten-free, but do you know hay from straw?), an impassioned plea to license politicians (we license beauticians ), and much more. This is P. J. at his finest.

P. J. O'Rourke has written nineteen books on subjects as diverse as politics and cars and etiquette and economics. Parliament of Whores and Give War a Chance both reached #1 on the New York Times bestseller list. He is a regular panelist on NPR's Wait Wait...Don't Tell Me, a contributing writer for the Washington Post editorial page, and the editor in chief of the free web magazine American Consequences. He lives in rural New England, as far away from the things he writes about as he can get.