Ship of Gold in the Deep Blue Sea (Paperback) 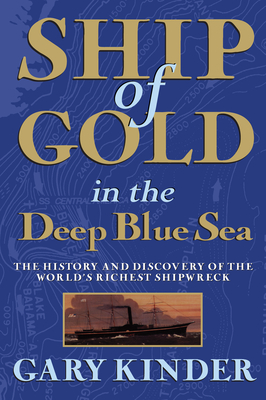 Originally published in 1998, Gary Kinder’s Ship of Gold in a Deep Blue Sea recounts Tommy Thompson’s search for the SS Central America, a sidewheel steamer carrying nearly 10 tons of gold from the gold rush in California to New York. Sunk in 1857 during a hurricane its location remained a tantalizing puzzle until the 1980’s when Thompson and the salvage company Columbus American Discovery group located the ship in nearly 8,000 feet of water off the South Carolina coast. At that time the equipment didn’t exist to recover treasure at that depth which required Thompson and his team to manufacture a Remotely Operated Vehicle that would work in depths never before attempted. In a field fraught with fierce rivalry, secrecy, deceit and massive egos Thompson managed to verify the authenticity of the wreck, build a working prototype ROV, excavate, and ultimately recover some of the millions of dollars worth of gold bars and coins that were part of the cargo. Recent news announcements regarding efforts to bring up the remaining gold still at the wreck site have returned the ship of gold to the spotlight. Kinder’s book deftly weaves together the history of the Central America and its tragic end with the backstory of one man’s obsession in finding and recovering its phenomenal treasure. — Jen Canfield

An 1857 steamer loaded with gold is sunk during a hurricane. . .In the 1980s a young treasure hunter goes after the gold. . .All 21 tons. A techno-thriller from 2 centuries. — Bill Lewis

Originally published in 1998 and a best seller in its hardcover and paperback publications, Gary Kinder's Ship of Gold in the Deep Blue Sea tells the story of the sinking of the SS Central America, a side-wheel steamer carrying nearly six hundred passengers returning from the California Gold Rush, two hundred miles off the Carolina coast in September 1857. Over four hundred lives and twenty-one tons of California gold were lost. It was the worst peacetime disaster at sea in American history, a tragedy that remained lost in legend for over a century. In the 1980s, a young engineer from Ohio set out to do what no one, not even the U.S. Navy, had been able to do: establish a working presence on the deep ocean floor and open it to science, archaeology, history, medicine, and recovery. The SS Central America became the target of his project. After years of intensive efforts, Tommy Thompson and the Columbus-America Discovery Group found the Central America in eight thousand feet of water, and in October 1989 they sailed into Norfolk with her recovered treasure: gold coins, bars, nuggets, and dust, plus steamer trunks filled with period clothes, newspapers, books, journals, and even an intact cigar sealed under water for 130 years. Life magazine called it "the greatest treasure ever found." Gary Kinder tells an extraordinary tale of history, human drama, heroic rescue, scientific ingenuity, and individual courage. Ship of Gold in the Deep Blue Sea is a testament to the human will to triumph over adversity. It is also a great American adventure story of the opening of Earth's last frontier.

Gary Kinder is the author of the bestselling books Victim and Light Years. He lives in Seattle with his wife and two daughters.