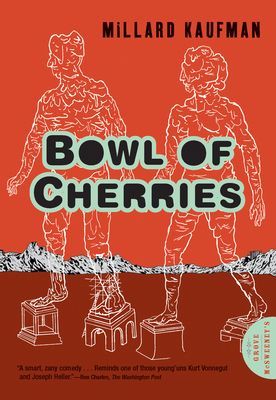 Terrifically entertaining tongue-in-cheek saga of a young man's fantastic adventures. After he is dismissed from Yale University, Judd agrees to do research for an eccentric Egyptologist, but it is the man's daughter who causes him to stray from his work, ultimately landing him in a jail cell in Iraq awaiting execution. Quirky and altogether delightful fun that may occasionally have you laughing out loud. Author Millard Kaufman wrote the script for the classic Spencer Tracy film, Bad Day At Black Rock.

The brilliant creation of ninety-year-old debut novelist Millard Kaufman, co-creator of Mr. Magoo and twice-nominated for Academy Awards for screenwriting, Bowl of Cherries rivals the liveliest comic epics for giddy wordplay and gleeful invention. Kicked out of Yale at the age of fourteen, Judd Breslau falls in with Phillips Chatterton, a bathrobe-wearing Egyptologist working out of a dilapidated home laboratory. Entranced by Chatterton's daughter, Valerie, Breslau abandons his studies and decides to move in with the eccentric scientist and assist with research. But the work is not what Judd had thought and, mesmerized by Valerie, Breslau follows her to a number of strange locales--a secret attic in her father's home, a Colorado equestrian ranch, and a porn studio beneath the Brooklyn Bridge. Judd ultimately makes his way to the forlorn Iraqi province of Assama, ending up in a jail cell from which he narrates the novel, awaiting his execution while war rages on around him.Kaufman's debut is a book of astounding breadth and sharp consequences, containing all the joy, madness, terror, and doubt of adolescence and everything after.

[Kaufman] is a wildly imaginative and funny writeran ageless author who is ripe for a new audience.” Los Angeles Times

Equal parts Catcher in the Rye and Die Hard.” The New Yorker

A smart, zany comedy . . . That weird incongruity between highbrow/lowbrow humor is only part of what makes Bowl of Cherries so irresistible. Kaufman's comic imagination, his ability to mix things scatological and historical, political and philosophical, reminds one of those young'uns Kurt Vonnegut and Joseph Heller. The ridiculous slapstick in Assama is straight from Woody Allen's Don't Drink the Water, and a cameo appearance by a goofy President Bush will take you back to Dr. Strangelove. But Kaufman seems to have more heart than those '60s satirists; his precocious young hero pulls on our sympathies even as he trudges on through absurdity.” Ron Charles, Washington Post

Kaufman doesn't disappoint, and his narrative is infused with . . . wisdom and whimsy . . . Kaufman exudes a vitality that novelists half his age would envy.” Baltimore Magazine

The ninety year old’s inquisitiveness and tenacity shine brightly within the novel, in which he weaves words more impressively than a spider spins a web.” Rocky Mountain Chronicle

Bowl of Cherries reads like a picaresque Kurt Vonnegut farce narrated by Augie March . . . The descriptions of Judd's troubled upbringing and the world of higher education are as gorgeously blooming as his carnal adventures are funny . . . a knowing satire of the American lust for recognition at any cost.” Baltimore City Paper

When you read Bowl of Cherries, you will know that this writer is a reader . . . the modus operandi of this book is to find a way to laugh at anything . . . I haven’t had this kind of fun in a long time.” Michael Silverblatt, KCRW Bookworm

Make no mistake, Bowl of Cherries is crass, offensive and overblown, but its portrait of a world driven mad by greed and hucksterism, miracle cures and imperialist agendas stumbles smack into its share of worthy targets.” Jewish Daily Forward