The Harrows of Spring (World Made by Hand Novels) (Hardcover) 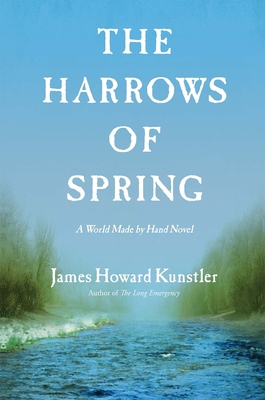 From renowned social critic, energy expert, and bestselling author James Howard Kunstler, The Harrows of Spring is a moving and gripping novel that completes the story of the quaint upstate New York town of Union Grove, thrown into a future world that in many ways resembles the nineteenth century. In Union Grove, early spring is a challenging season, known as the "six weeks want," a time when fresh food is scarce and the winter stores are dwindling. The town is struggling in particular this year as the Hudson River trade route to Albany has been halted by the local plantation tycoon Stephen Bullock, who has deemed it too resource-intensive and is now striving for self-sufficiency. Meanwhile, after returning from his travels around what is left of the United States, Daniel Earle is intent on resurrecting a newspaper for the community, and finds an interesting story to cover when representatives of a group of anti-establishment, hyper-liberals known as the Berkshire People's Republic arrive in the town. The thrilling conclusion to Kunstler's beloved series, The Harrows of Spring is a powerful, moving tale of insurrection, survival, and what it means to be human.

James Howard Kunstler is the author of thirteen novels, including World Made by Hand, The Witch of Hebron, A History of the Future, and five nonfiction books, including The Long Emergency and Too Much Magic. He has participated in TED conferences and lectured at Harvard, Yale, Columbia, Cornell, MIT, and many other colleges, and regularly appears before professional organizations across the country. He lives in upstate New York.