The Law of the Land: The Advent of the Torrens System in Canada (Osgoode Society for Canadian Legal History) (Hardcover) 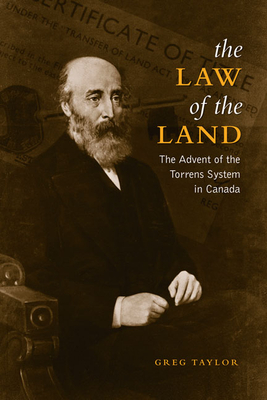 By Greg Taylor
Call or email to see if a used copy is available.
Out of Print

How was it that the Torrens system, a mid-nineteenth-century reform of land titles registration from distant South Australia, gradually replaced the inherited Anglo-Canadian common law system of land registration? In The Law of the Land, Greg Taylor traces the spread of the Torrens system, from its arrival in the far-flung outpost of 1860s Victoria, British Columbia, right up to twenty-first century Ontario.

Examining the peculiarity of how this system of land reform swept through some provinces like wildfire, and yet still remains completely unknown in three provinces, Taylor shows how the different histories of various regions in Canada continue to shape the law in the present day. Presenting a concise and illuminating history of land reform, he also demonstrates the power of lobbying, by examining the influence of both moneylenders and lawyers who were the first to introduce the Torrens system to Canada east of the Rockies.

An exact and fluent legal history of regional law reforms, The Law of the Land is a fascinating examination of commonwealth influence, and ongoing regional differences in Canada.