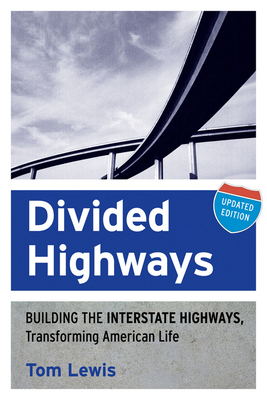 Local author and a great read about the landscape of the U.S. and its transformation after Route 66. — Northshire Staff

"Anyone who has ever driven on a U.S. interstate highway or eaten at an exit-ramp McDonald's will come away from this book with a better understanding of what makes modern America what it is." - Chicago Tribune

"A fascinating work... with a subject central to contemporary life but to which few, if any, have devoted so much thoughtful analysis and good humor." - Minneapolis Star-Tribune

"Divided Highways is the best and most important book yet published about how asphalt and concrete have changed the United States. Quite simply, the Interstate Highway System is the longest and largest engineered structure in the history of the world, and it has enormously influenced every aspect of American life. Tom Lewis is an engaging prose stylist with a gift for the telling anecdote and appropriate example."--Kenneth T. Jackson, Harvard Design Magazine

"Lewis provides a comprehensive and balanced examination of America's century-long infatuation with the automobile and the insatiable demands for more and better road systems. He has written a sprightly and richly documented book on a vital subject."--Richard O. Davies, Journal of American History

"Lewis describes in a convincing, lively, and well-documented narrative the evolution of America's roadway system from one of the world's worst road networks to its best."--John Pucher, Journal of the American Planning Association

"This brightly written history of the U.S. federal highway program is like the annual report of a successful company that has had grim second thoughts. The first half recounts progress made, while the second suggests that the good news is not quite what it seems."--Publishers Weekly

"Lewis is a very talented and engaging writer, and the tale he tells--the vision for the Interstates, Congressional battles, construction, and the impact of new highways on American life--is important to understanding the shape of the contemporary American landscape."--David Schuyler, Arthur and Katherine Shadek Professor of the Humanities and American Studies at Franklin & Marshall College, author of Sanctified Landscape: Writers, Artists, and the Hudson River Valley, 1820-1909

In Divided Highways, Tom Lewis offers an encompassing account of highway development in the United States. In the early twentieth century Congress created the Bureau of Public Roads to improve roads and the lives of rural Americans. The Bureau was the forerunner of the Interstate Highway System of 1956, which promoted a technocratic approach to modern road building sometimes at the expense of individual lives, regional characteristics, and the landscape. With thoughtful analysis and engaging prose Lewis charts the development of the Interstate system, including the demographic and economic pressures that influenced its planning and construction and the disputes that pitted individuals and local communities against engineers and federal administrators. This is a story of America's hopes for its future life and the realities of its present condition.

Originally published in 1997, this book is an engaging history of the people and policies that profoundly transformed the American landscape--and the daily lives of Americans. In this updated edition of Divided Highways, Lewis brings his story of the Interstate system up to date, concluding with Boston's troubled and yet triumphant Big Dig project, the growing antipathy for big federal infrastructure projects, and the uncertain economics of highway projects both present and future.

Tom Lewis is Professor of English at Skidmore College. He is the author of Empire of the Air: The Men Who Made Radio and The Hudson: A History, as well as researcher, writer, or producer for documentary films including Brooklyn Bridge, The Shakers, and Empire of the Air (all directed by Ken Burns) and Divided Highways (directed by Larry Hott and Diane Garey).