Uncas: First of the Mohegans (Hardcover) 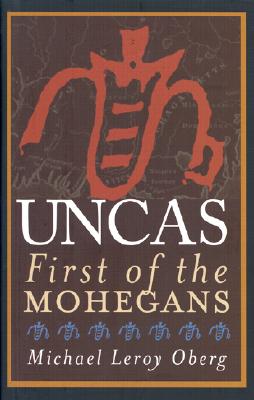 Excellent study of the most controversial Native American in New England history. Was he an English lackey or a realistic leader helping his people survive a whirlwind of catastrophic change? — Bill Lewis

Many know the name Uncas only from James Fenimore Cooper's The Last of the Mohicans, but the historical Uncas flourished as an important leader of the Mohegan people in seventeenth-century Connecticut. In Uncas: First of the Mohegans, Michael Leroy Oberg integrates the life story of an important Native American sachem into the broader story of European settlement in America. The arrival of the English in Connecticut in the 1630s upset the established balance among the region's native groups and brought rapid economic and social change. Oberg argues that Uncas's methodical and sustained strategies for adapting to these changes made him the most influential Native American leader in colonial New England.

Emerging from the damage wrought by epidemic disease and English violence, Uncas transformed the Mohegans from a small community along the banks of the Thames River in Connecticut into a regional power in southern New England. Uncas learned quickly how to negotiate between cultures in the conflicts that developed as natives and newcomers, Indians and English, maneuvered for access to and control of frontier resources. With English assistance, Uncas survived numerous assaults and plots hatched by his native rivals.

Unique among Indian leaders in early America, Uncas maintained his power over large numbers of tributary and other native communities in the region, lived a long life, and died a peaceful death (without converting to Christianity) in his people's traditional homeland. Oberg finds that although the colonists considered Uncas a friend to the English, he was first and foremost an assertive guardian of Mohegan interests.

Michael Leroy Oberg is Associate Professor of History at the State University of New York'Geneseo. He is the author of Dominion and Civility: English Imperialism and Native America, 1585'1685, also from Cornell.