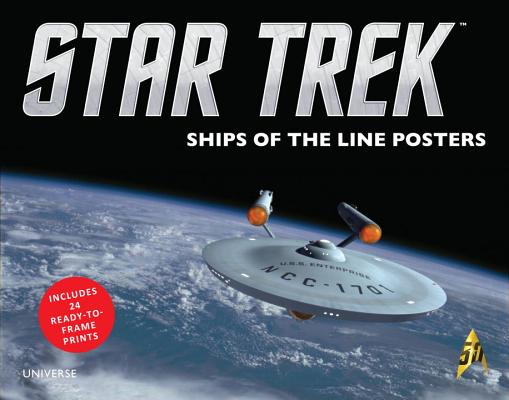 Easily framed, high-quality, collectible prints by fan-favorite artists depict iconic scenes and the world-famous spacecraft, in celebration of Star Trek’s landmark 50th anniversary in 2016. ﻿Conceptual artists and graphic designers breathe incredible life into the alien worlds, serene galactic vistas, famous missions, and harrowing battles from Star Trek history in twenty-four stunning Ships of the Line posters. Formerly included in the long-running Star Trek: Ships of the Line calendar and used as novel covers, none of these images has ever been available in poster form.
This boxed collection of easily framed posters gives fans an all-new, accessible way to display artwork from their favorite sci-fi franchise. Vividly reproduced on high-quality stock and including the artist’s name and the title image, each print makes an elegant addition to any fan’s space. Together, it’s a serious collection of eye-popping official Star Trek artwork.

Each version of the U.S.S. Enterprise is included, from Star Trek: The Original Series, the films, and Star Trek: The Next Generation, as well as Deep Space 9, the U.S.S. Voyager, and other familiar vessels, such as Klingon birds-of-prey and a Borg Cube.

"Comprised of spectacular illustrations/paintings of various ships against alien worlds, far-flung galaxies and classic Star Trek scenes, the book is sure to be a 'must-have' for any Star Trek fan worth their weight in Dillithium Crystals."
-CollectorsCorner.com

"Star Trek: Ships of the Line Posters mines some of the most dazzling and collectible art work from the show's and movie's extensive archives . . . Vividly reproduced on high-quality stock and including the artist's name and the title image, these prints are perfect for decorating any space, from a dorm or den to bedroom or media room."
-ForcesOfGeek.com