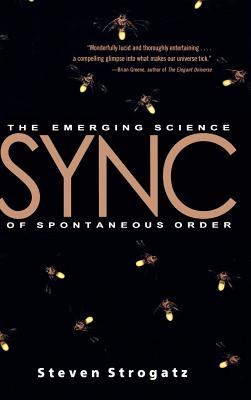 At the heart of the universe is a steady, insistent beat, the sound of cycles in sync. Along the tidal rivers of Malaysia, thousands of fireflies congregate and flash in unison; the moon spins in perfect resonance with its orbit around the earth; our hearts depend on the synchronous firing of ten thousand pacemaker cells. While the forces that synchronize the flashing of fireflies may seem to have nothing to do with our heart cells, there is in fact a deep connection. Synchrony is a science in its infancy, and Strogatz is a pioneer in this new frontier in which mathematicians and physicists attempt to pinpoint just how spontaneous order emerges from chaos. From underground caves in Texas where a French scientist spent six months alone tracking his sleep-wake cycle, to the home of a Dutch physicist who in 1665 discovered two of his pendulum clocks swinging in perfect time, this fascinating book spans disciplines, continents, and centuries. Engagingly written for readers of books such as Chaos and The Elegant Universe, Sync is a tour-de-force of nonfiction writing.

Steven Strogatz received his doctorate from Harvard University and served on the faculties of Harvard and MIT before becoming a professor of applied mathematics at Cornell Universitty in 1994. Widely recognized for his groundbreaking discoveries in chaos and complexity theory, he has received numerous awards throughout his career, including MIT's highest teaching prize and a Presidential Young Investigator Award from the White House. He lives in Ithaca, New York, with his wife, Carol, and their two daughters, Leah and Joanna.