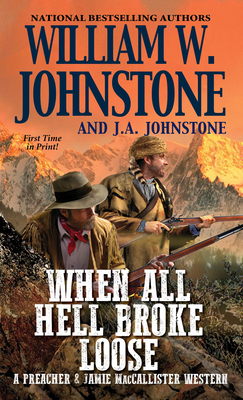 This is book number 3 in the A Preacher & MacCallister Western series.

Johnstone Men on a Mission. A Hunting Party Massacre.

Two legends of the American West, Preacher and MacCallister have always fought for justice. Even when all parties were guilty. When all hope was lost. And when all the killing started...

WHEN ALL HELL BROKE LOOSE

It's one of the great mysteries of the Old West. The unexplained disappearance of a hunting party of Prussian nobles who entered the American wilderness--and never returned. Now, years later, the Prussian government demands an explanation. In response, the U.S. Army hires Preacher and Jamie MacCallister to join their search party--along with a band of Prussian soldiers led by the sinister Baron Adalwolf von Kuhner. Some believe it's a hopeless mission, that the original party was slaughtered by the Blackfeet. Others think there may be survivors, most likely women held captive as slaves. But it doesn't take Preacher and MacCallister long to learn the horrible truth...

This is no rescue mission. It's a massacre in the making. And when the hunters become the hunted, all hell breaks loose...

"Every day with Bill was an adventure story in itself. Bill taught me all he could about the art of storytelling. ‘Keep the historical facts accurate,' he would say. ‘Remember the readers, and as your grandfather once told me, I am telling you now: be the best J.A. Johnstone you can be.'"