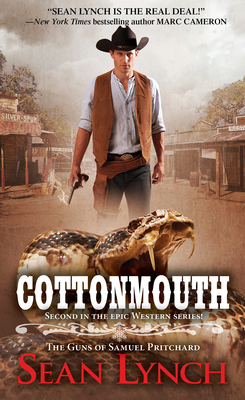 This is book number 2 in the The Guns of Samuel Pritchard series.

A legendary gunfighter can never outrun the ghosts of his past. But he can outshoot them. Acclaimed author Sean Lynch’s epic saga of Samuel Pritchard continues—with a venegance . . .

1874. After losing his innocence in the Civil War and risking his life as a Texas Ranger, Samuel Pritchard has finally settled into a peaceful life in his hometown of Atherton, Missouri. As marshall, he hopes to put his bloody past behind him. To see his sister marry his lifelong friend. To find a wife and raise a family. For the first time in his life, Pritchard isn’t gunning for anyone—and no one is gunning for him. Or so he thinks. Strangers have arrived in Atherton. Hard-eyed men with guns. Someone has placed a bounty on Pritchard’s head: $10,000 in gold, deposited anonymously in a Wells Fargo bank, payable to anyone who puts the legendary pistolero in a pine box. . . .

This is the story of Samuel Pritchard. A small-town sheriff with a larger-than-life reputation, lightning-fast guns, and a long list of enemies who’d love to see him dead. . . .

“A riveting thriller that bristles with hard-boiled authenticity.”
—Bestselling author Mark Greaney on Thy Partner’s Wife

“Sean Lynch spins a tale that is fast, fun and realistic.”
—Bestselling author James O. Born on Like Hell

Sean Lynch grew up in Iowa, served in the army as an enlisted infantryman, and spent almost three decades as a municipal police officer in the San Francisco Bay Area. During his law enforcement career, he’s been a motorcycle officer, firearms instructor, S.W.A.T. team member, sex crimes investigator, and homicide detective. Learn more about Sean at seanlynchbooks.com.