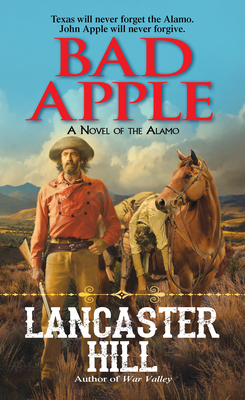 Many men fought—and many men died—in the Texas Revolution of 1836. This is the story of John Apple. A man who not only fought in the battle of the Alamo, he lived to avenge it . . .

THE ROAD TO THE ALAMO

John Apple is a simple man. A gardener and preacher who lives a quiet life in Ohio. Then a broken heart sends him south. A chance encounter with a very drunk Jim Bowie leads him to join the Texian Army. And the struggle for independence from the brutalities of Mexican President Santa Ana teaches Apple a valuable new skill: Killing.

Working with Bowie, Sam Houston, Stephen Austin and their ragtag army, Apple becomes a secret courier and bloody advocate for the cause. As a calling card, he plants apple seeds in the chests of every soldier he slays—and sparks fear in the hearts of Santa Ana’s men. But nothing could prepare him for the fate that awaited them at the Alamo Mission. Nothing could save his brothers in arms from the devastating slaughter that would go down in history. And now, for John Apple, nothing would be sweeter than revenge . . .

Lancaster Hill is the pseudonym of New York Times bestselling author Jeff Rovin. Rovin has been an assistant editior for DC Comics, and the editor in chief of the Weekly World News, and has authored multiple titles in the Tom Clancy: Op-Center series. This is his first western novel.