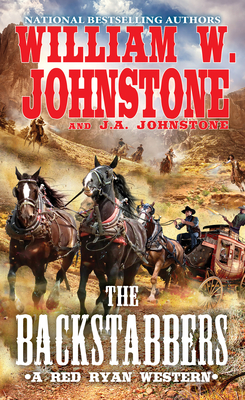 This is book number 2 in the A Red Ryan Western series.

FIRST RULE OF JOHNSTONE COUNTRY: TRUST NO ONE

No one knows the dangers of driving a stagecoach better than Red Ryan. Especially when the passenger’s a dead man, the payoff’s a gold mine, and the last stop is death . . .

SECOND RULE: WATCH YOUR BACK

Red Ryan should’ve known this job would be trouble. The first stop is a ghost town—in a thunder storm—and the cargo is a coffin. But things start to look a little brighter when Red and his stage guard Buttons Muldoon deliver the corpse to a ranch run by the beautiful Luna Talbot—and her gorgeous crew of former saloon girls. Luna asks the boys to help them find the Lucky Cuss Gold Mine, using a map tucked inside the dead man’s pocket. Buttons can’t refuse a pretty lady—or the lure of gold. But Red has a feeling they’re playing with fire. Especially when the map leads them straight into crossfire of a ferocious range war, a 400-pound load of pure evil known as Papa Mace Rathmore—and his backwoods clan of sadistic, kill-crazy hillbillies . . .