The Shotgun Wedding (Have Brides, Will Travel #2) (Mass Market) 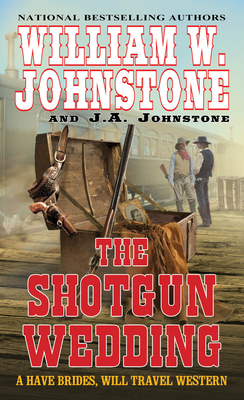 This is book number 2 in the Have Brides, Will Travel series.

The all-time masters of the classic Western cordially invite you to another trip down the aisle with America's mail order brides--and the foolhardy men who thought they could tame them...

Bo Creel and Scratch Morton are mighty proud. They managed to deliver five mail-order brides to the New Mexico mining town of Silverhill in one piece. The town is so grateful, they want to make Bo their marshal and Scratch his deputy. Bo and Scratch are happy to accept the job--and even happier to attend the weddings of the fine young women they brought here...

Cecelia has two young suitors--a well-off rancher and a low-born miner--but one of them is not what he seems. Tomboyish Rose has gotten herself roped into a cow-rustling scheme--with the wild young buck who's stolen her heart. Luella has a not-so-secret admirer of her own, a former journalist who's making headlines--with a gang of Mexican bandits. And the refined Jean Parker thinks she's finally found a suitable match in this raucous boomtown. But it turns out her educated doctor has a dishonorary degree--in killing.

With marriage prospects like these, Bo and Scratch will have to fight tooth and nail to keep the ladies safe and sound--and a real shotgun wedding is about to begin.

William W. Johnstone is the New York Times and USA Today bestselling author of over three hundred novels of Western adventure, military action, and chilling suspense, and with over 35 million books in print, he is the bestselling Western writer in the world. Born in southern Missouri, he was raised with strong moral and family values by his minister father, and tutored by his schoolteacher mother. He left school at fifteen to work in a carnival and then as a deputy sheriff before serving in the army. He went on to become known as "the Greatest Western writer of the 21st Century." Visit him online at WilliamJohnstone.net.

J.A. Johnstone learned to write from the master himself, Uncle William W. Johnstone, who began tutoring J.A. at an early age. After-school hours were often spent retyping manuscripts or researching his massive American Western History library as well as the more modern wars and conflicts. J.A. worked hard--and learned. "Every day with Bill was an adventure story in itself. Bill taught me all he could about the art of storytelling. 'Keep the historical facts accurate,' he would say. 'Remember the readers, and as your grandfather once told me, I am telling you now: be the best Johnstone you can be." J.A. Johnstone has co-written numerous bestselling series with William W. Johnstone including The First Mountain Man, The Brothers O'Brien, Preacher, and The Last Mountain Man.