Wine and War: The French, the Nazis, and the Battle for France's Greatest Treasure (Paperback) 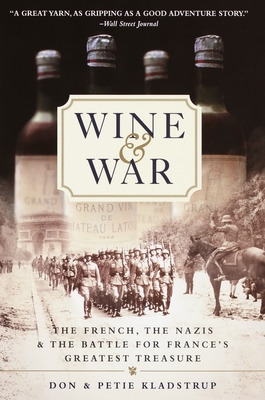 The remarkable untold story of France’s courageous, clever vinters who protected and rescued the country’s most treasured commodity from German plunder during World War II.

"To be a Frenchman means to fight for your country and its wine."
–Claude Terrail, owner, Restaurant La Tour d’Argent

In 1940, France fell to the Nazis and almost immediately the German army began a campaign of pillaging one of the assets the French hold most dear: their wine. Like others in the French Resistance, winemakers mobilized to oppose their occupiers, but the tale of their extraordinary efforts has remained largely unknown–until now. This is the thrilling and harrowing story of the French wine producers who undertook ingenious, daring measures to save their cherished crops and bottles as the Germans closed in on them. Wine and War illuminates a compelling, little-known chapter of history, and stands as a tribute to extraordinary individuals who waged a battle that, in a very real way, saved the spirit of France.

The winner of three Emmys and the Alfred I. duPont—Columbia University, Robert F. Kennedy Memorial, and the Overseas Press Club of America Awards for his journalism, Don Kladstrup is one of America's most distinguished network television news correspondents. His wife, Petie Kladstrup, is a freelance writer who has written widely about France and French life. Contributors to Wine Spectator, the Kladstrups divide their time between Paris and Normandy.

"A great yarn, as gripping as a good adventure story." –Wall Street Journal

"Assured, detailed, highly readable . . . does honor to all those who labored to keep French wines from barbarous hands. An engrossing addition to the popular literature of WWII." –Kirkus Reviews

"[A] gem for wine aficionados and history buffs." –Boston Herald

"As exciting and interesting and pleasurable as wine itself." –Robert Mondavi, Chairman Emeritus, The Robert Mondavi Winery