The Accidental Highwayman: Being the Tale of Kit Bristol, His Horse Midnight, a Mysterious Princess, and Sundry Magical Persons Besides (Hardcover) 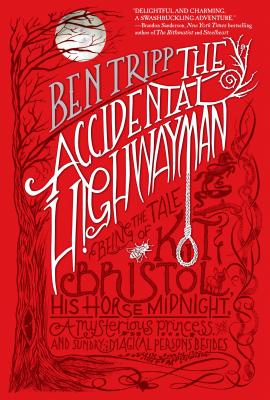 By Ben Tripp
Call or email to see if a used copy is available.
Out of Print

Land pirates and warring fairies in Georgian England! Poor Kit Bristol never meant to become a highwayman, but his honorable efforts to do the right thing make him a true hero. The style is Tristram Shandy but totally accessible and great fun! — Jennifer Armstrong

The Accidental Highwayman is the first swashbuckling adventure for young adults by talented author and illustrator, Ben Tripp.

In eighteenth-century England, young Christopher "Kit" Bristol is the unwitting servant of notorious highwayman Whistling Jack. One dark night, Kit finds his master bleeding from a mortal wound, dons the man's riding cloak to seek help, and changes the course of his life forever. Mistaken for Whistling Jack and on the run from redcoats, Kit is catapulted into a world of magic and wonders he thought the stuff of fairy tales.
Bound by magical law, Kit takes up his master's quest to rescue a rebellious fairy princess from an arranged marriage to King George III of England. But his task is not an easy one, for Kit must contend with the feisty Princess Morgana, gobling attacks, and a magical map that portends his destiny: as a hanged man upon the gallows….
Fans of classic fairy-tale fantasies will find much to love in this irresistible YA debut by Ben Tripp, the son of one of America's most beloved illustrators, Wallace Tripp (Amelia Bedelia). Following in his father's footsteps, Ben has woven illustrations throughout the story.
"Delightful and charming. A swashbuckling adventure in the vein of Robert Louis Stevenson." —#1 New York Times bestselling author Brandon Sanderson

Ben Tripp grew up in the US in a creative household of travelers and artists. He spent a year in England at age seven, followed by a year roaming throughout Europe in a VW camper van. He attended the Rhode Island School of Design for illustration and at the age of 22 he became the youngest show designer ever recruited by Disney to work at Walt Disney Imagineering. He is the author of the adult novels Rise Again, Rise Again: Below Zero, and Fifth Chamber of the Heart. The Accidental Highwayman is his first novel for young adults.

“Readers will root for star-crossed lovers, Kit and Morgana, and delight in their ‘opposites attract' romance, drawn onward by a rollicking plot…. Fantasy readers, especially fans of Catherynne Valente's work, will enjoy the author's elegant turns of phrase. A first purchase for all fantasy collections.” —School Library Journal, Starred Review

“Spells, wishes and fantastical creatures aside, this rollicking yarn owes more to R.L. Stevenson than J.K. Rowling. Kit's wry voice provides a fine pastiche of old-fashioned tale-telling… enlivened by breakneck pacing, colorful similes and a sly wit aimed at modern sensibilities…. Kit himself is as brave, clever and good-natured an orphan lad as ever buckled a swash. The promise of more adventures to come provides happily-ever-after enough. They can still write 'em like they used to; hurrah!” —Kirkus Reviews

“While the journey isn't quick, it never grows tedious--danger, magic, and intrigue wait at every turn. Tripp infuses his story with whimsy, humor, and derring-do, and his miniature spot illustrations and handful of lovely full-page pieces add to the overall charm.” —Publishers Weekly

“Tripp builds a richly imagined fantasy world, captured both in Kit's dry, witty first-person narrative and Tripp's detailed illustrations. The complex political machinations… make for a compelling and quietly sinister background thrum that builds until the exciting concluding battle, which handily leaves room for more adventures in the planned trilogy. Fans of classic adventure will find plenty to like here.” —Booklist