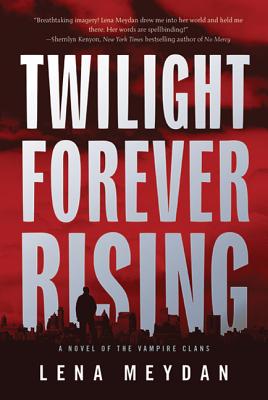 A Russian bestseller available for the first time in the US. Darel, a vampire empath, must decide how much he is willing to sacrifice for the love of a human. While I enjoyed Darel, it was Meydan's mythology and political intrigue that hooked me. — Ben Parker

Darel Ericson of the Dahanavar clan is a rarity among his vampire brethren: he's an empath, strong enough to occasionally read thought as well as emotion. For centuries, his power has given the Dahanavar a significant advantage against the machinations of the other vampire families, an advantage which makes Darel both a powerful tool and a highly visible target.

Fortunately for Darel, it is more useful for the heads of the other clans to maintain the centuries-long peace between the houses than to remove him. But, the cunning and violent head of the House of Nachterret is tired of the truce, and of hiding his presence in the world. The Nachterret would like nothing more than have free reign over the helpless human cattle upon which they feed.

Darel, and the human woman he loves, become central to the Nachterret's scheme to plunge the Houses into all out war. Darel is ultimately forced to face the question: is one young woman's life too high a price to pay for peace?

Lena Meydan is a bestselling author in her native Russia and won the Silver Kaduzei, the highest literary award at the Star Bridge International Festival of Fantasy, for her first novel.  Her second novel, Twilight Forever Rising, won Best Urban Fantasy for 2000-2005 by the 13th International Congress of Fantasy Writers in St. Petersburg.

“Breathtaking imagery! Lena Meydan drew me into her world and held me there. Her words are spellbinding!” —Sherrilyn Kenyon, New York Times bestselling author of Silent Truth

“Addictive, lyrical, peopled with vivid personalities and volatile plotting, Twilight Forever Rising is an engagingly well-written, satisfying blending of vampires, magic, and brilliant terror. Be prepared to read it in one sitting!” —P.N. Elrod, author of The Vampire Files

“The plethora of vampire novels on bookstore shelves is daunting and discovering a must-read is finding the literary needle in the haystack. That's why Lena Meydan is such a treasure. Her prose is luscious: stylish, cultured, funny, tragic, and at the same time weaving an intricate, action-packed story saturated with love, death and power-struggles. Twilight Forever Rising is supernatural literature at its best, in the tradition of Bram Stoker and Mary Shelley. . . . You'll not find a better modern vampire read.” —Nancy Kilpatrick, author of Power of the Blood and editor of Evolve: Vampire Stories of the New Undead